Dennis Glavis spent 20 years of his life at Ferrari of Los Gatos. He began his career with the infamous dealership not long after his friend, Jack Gordon, said to him, “I know some guys that are going to open a Ferrari store soon, and I think I can get us jobs there.”

Jack was the first to be hired, then Bill Warren, and a guy nicknamed ‘Stretch.’ When Stretch had to take an extended leave of absence, Jack told owners Brian Burnett and Richard Rivoir about Dennis. His interview lasted just a few minutes and ended with, “Show up for work tomorrow.” So he did.

It was 1976, and the casual atmosphere at the dealership made customers and employees feel comfortable. California wasn’t like the Northeast where the Ferrari salesmen went to work in three-piece suits—at least not at Ferrari of Los Gatos.

I know some guys that are going to open a Ferrari store soon and maybe we can get jobs there?

The term ‘Silicon Valley’ hadn’t been coined yet. The salesmen at Ferrari of Los Gatos referred to the area as Hard Drive Valley. Many of the dealership’s early customers worked at Seagate Technology, one of the pioneers in computer data storage. Seagate employees went to work in t-shirts and shorts, which fit right in with the casual style at Ferrari of Los Gatos.

“Not only was the dealership a comfortable place to work, but the owners also let the sales staff do their own deals,” said Dennis. “You had to clear trade-ins and tell them what car you were selling, and they’d respond, ‘Okay, good.’ ” This management style gave Brian time to pursue other interests, such as Muscle cars, Hot Rods, and Street Rods. 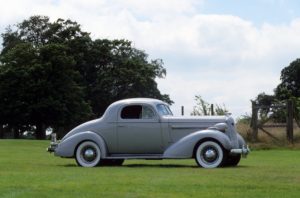 Dennis reminisced, “I knew nothing about Hot rods or Street Rods when I started. Cars like ‘36 and ‘38 Buicks were some of Brian’s favorites, and I developed a respect and appreciation of these older models. While they weren’t my forte, they were still automotive art. The guys that owned them loved to hang out at the dealership and talk about cars.”

The term Silicon Valley hadn’t been coined yet and salesmen at Ferrari of Los Gatos referred to the area as Hard Drive Valley.

Several of the car owners that met at Ferrari of Los Gatos attended car shows together. One time they drove across the country as a group. Dennis watched them having a lot of fun and adventures along with their cars, and he admired that.

Plus, the job was lucrative for Dennis. The business did really well for a couple of years, and everybody—including the salesmen—made a lot of money.

Then 1980 hit—the economy tanked—and it wasn’t easy to sell Ferraris. You can read more about this in the next post.