In the mid-1950s Ferrari was deeply immersed in the business of building, selling, and racing an impressive array of sports cars. Four, six and twelve-cylinder engines were employed in spyders and berlinettas bodied by Touring, Vignale, Scaglietti, and Pinin Farina. 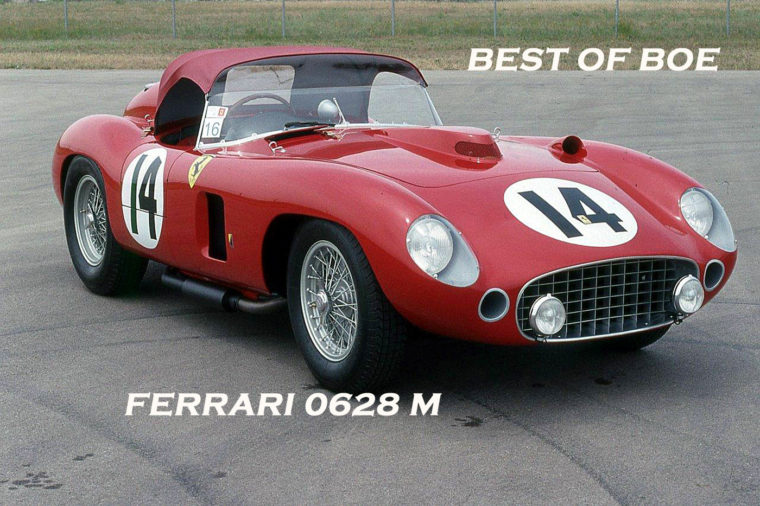 The ability to manufacture such a fantastic variety of sporting machinery did not seem out of the ordinary…for Ferrari. It was accepted practice then, but it would be impossible today! And none of Ferrari’s competition at the time could produce anywhere near the range of sports racing cars that Ferrari did. 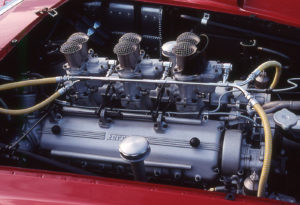 Portago Sat Here, and Everyone Else Did Too

In 1955, Ferrari built four-cylinder Monzas and Mondials, six-cylinder 118 and 121 LMs, and twelve-cylinder 375 Plus and 410 Sport models. By 1956 the Factory relied on 857 and 860 four-cylinder Monzas and twelve-cylinder 290 MM spyders and continued to offer customers 750 Monzas, 500 Mondials, and the Mondial’s replacement, the 500 Testarossa. And again, all of this was in addition to the usual assortment of GT berlinettas, road cars, and Formula One cars. 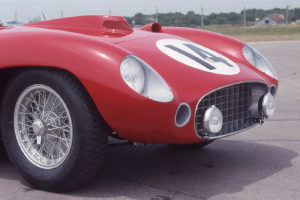 One of Ferrari’s classic competition cars. Not a bad line anywhere.

Out of this remarkable collection of race cars came some very famous Ferraris, but none more so than an 860 Monza completed in March of 1956. This 3.4-liter inline four-cylinder spyder, s/n 0628 M, was a Factory team car throughout the 1956 season, then modified to a twelve-cylinder 290 MM and raced by the Ferrari Factory for the first two Championship events of 1957. During its tenure as a Ferrari entry, it was raced by 11 of the world’s greatest drivers; Castellotti, Collins, Fangio, Gendebien, Gurney, Herrmann, Maglioli, Phil Hill, Portago, Swaters, and von Trips. After being sold to Jan de Vroom of New York in August of 1957, the list expanded to 13 by including Stirling Moss and Ed Crawford.

Ferrari decided to contest the 1956 Manufacturer’s Championship with both 860 Monzas and 290 MM spyders. The third and last 860 Monza was 0628 M, completed in time for the Mille Miglia, and driven by Peter Collins, with Louis Klemantaski navigating and shooting pictures from the passenger seat. They were the next to last car to start in what would be the wettest and foggiest Mille Miglia in history. Collins took second behind Castellotti in a 290 MM and finished the 1000 miles in 11 hours and 49 minutes. 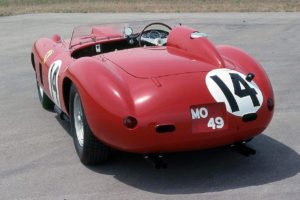 S/N 0628 M was the car used by Collins and Klemantaski in the 1956 Mille Miglia in the wettest event ever run.

At the Nurburgring race on May 27, Portago started with 0628 M but went off the track. When spectators assisted him, the car was disqualified.

The Swedish Grand Prix was the season’s finale, held August 12 on the circuit of Kristianstad. Since the season was still in doubt, Ferrari sent five cars while private parties entered another eight. Rival Maserati had five team cars in the race. Ferrari put Fangio and Castellotti into 0628 M. Castellotti started, worked up to the lead, and turned 0628 M over to Fangio, who extended the lead by two laps. With Castellotti back in for the finish, the car retired with just 30 laps to go. Hill and Trintignant won for Ferrari and Ferrari took the Manufacturer’s Championship with 24 points to Maserati’s 18.

During the winter of ’56-’57, 0628 M was turned into the fourth 290 Ferrari with a 3.5 liter 290 MM single overhead cam V12 engine that included three 46 DCF3 Weber carburetors with twin ignition. The car could produce up to 320 horsepower at 6,800 rpm. At the same time, Scaglietti cut a perfunctory passenger side door to satisfy a new rules requirement for 1957, a soft top was fabricated for the same reason, and an auxiliary 7.5-gallon fuel tank was installed inside the new door, rendering the door useless. Scaglietti also built a new hood with a larger scoop, and reworked the rear deck, making it look more like Ferrari’s new 315 Sport. 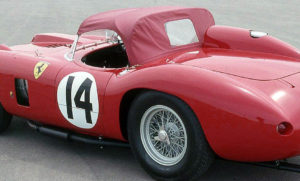 Oh that top. For 1957 the rules stated that all eligible cars must have two doors and a working top, which played havoc with the classical beauty of the car.

The conversion was completed by January 20 for the Championship event at Buenos Aires. Serial number 0628 M was assigned to Portago and von Trips for the race but the Ferraris driven by Collins and Castellotti were both retired, and the foursome teamed up to bring 0628 M home into third overall and second in class. Round two of the Championship was contested at Sebring on March 23. Ferrari entered 0628 M for Phil Hill and von Trips, running race number 14. 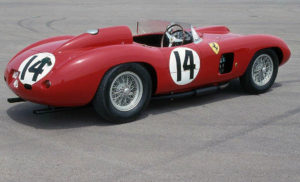 Maranello Made the 860 Monza Look Like a Ferrari Testarossa

After Sebring, the car was returned to the Factory where it received engine, chassis and transaxle work. On August 1st, it was sold via Jacques Swaters to Jan de Vroom of New York. De Vroom was a principle in Chinetti’s North American Racing Team. Now painted in NART’s blue and white colors, de Vroom entered it in the 1957 Championship race at Kristianstad, driven by de Vroom and Swaters. De Vroom overturned the car on lap 23.

Again back to Maranello for bodywork, where the nose was converted to look like the newer Testarossa model while retaining the blue and white colors. It was then shipped to Nassau, where Stirling Moss drove the car to win both the Nassau Trophy race and Nassau Memorial race. These races were the first time Moss drove in a Ferrari.

On January 2, 1958, 0628 M was flown to Chicago to be displayed by Chinetti at the Chicago Automobile Show with a $10,000 price tag. Unsold and still with de Vroom, it was entered for the Cuban Grand Prix for Ed Crawford on February 24. The race was red-flagged and stopped on lap 6; Crawford was awarded seventh place money. In September de Vroom entered the car for Dan Gurney at the USAC Pro race at Watkins Glen; Gurney finished second. De Vroom sold the car to Chinetti, who in turn sold it to George Reed Jr. for $7,000. Reed and Alan Connell entered 0628 M in the Road America 500 in the fall but failed to finish.

The Monza Engine Temporarily Lived in a Ferrari Testarossa

Reed took the motor out of 0628 and temporarily put it in his Testarossa 59/60, s/n 0770 TR. By now 0628 M was a well-used racecar. It’s last outing of any significance was on October 1st, 1961, when Reed offered the car to Owen Coon to run in an SCCA divisional at Meadowdale, Illinois when Owen placed seventh. It was hard to sell, and Reed kept it until 1967 when Harley Cluxton bought it. Two years later it was back with Chinetti, where it remained for the next 29 years. It got a partial restoration and was driven in the 1988 and 1990 historic Mille Miglia races.

Then in June of 1998, while in pieces, 0628 M was sold to Jon Shirley. In need of a complete rebuild, the car was turned over to Butch Dennison at Pete Lovely Racing in Puyallup, Washington. The engine was then dispatched to Autofficina Sauro in Bologna, Italy for repairs. The body was returned to the 1957 Sebring configuration, which required constructing a new front clip to replace the nose. After nearly three years of labor, 0628 M was back on the road. Its first public appearance being the 2001 Ferrari Club of America North American Field and Driving Concours, where it took the Enzo Ferrari Memorial Award for Best of Show. That same year it received the Luigi Chinetti Trophy at Pebble Beach for the most beautiful Ferrari in the show. 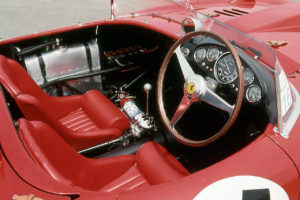 We will let our readers tell us if there is any other make or model car driven by more famous drivers than 0628 M.

It is not the most comfortable car to drive at a high speed due to the center throttle location, square cut gears, and right-hand drive but what a drive it is. Once underway, the whine from the transaxle and gearbox add another aural dimension on top of the wonderful V12 sound coming from under the hood. The cockpit is surprisingly roomy, the only tight spot being a necessarily small passenger’s foot box. Amazingly, the left side seat is the one Klemantaski occupied when Collins took them to second place in the 1956 Mille Miglia. Ferrari rides don’t get any better than that.

Portions of this article appeared in Cavallino Magazine, number 125.

If you have comments or a story about a Ferrari, or any other classic car, please share it with us here. Be sure to attach photos as well.