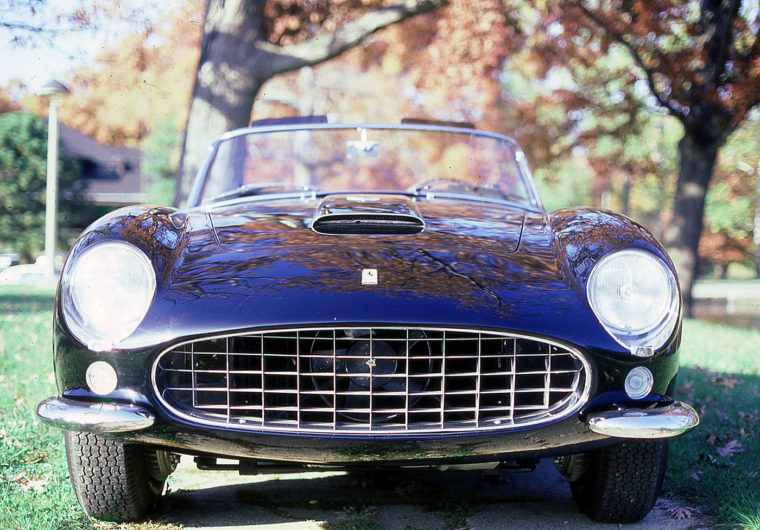 This blog post is a reprint of a story written by Alan Boe that appeared in VeloceToday.com.

Royalty and expensive motorcars just seem to go together. You know the types…Park Ward Rolls-Royces, Grosser Mercedes, and stretched limousines of various manufacture. They’re a normal part of any royal retinue. And why not? We’ve come to expect it.

But royal carriages are by no means limited to those stately, stodgy, ships of state normally associated with princely people. Perhaps less well known is that a goodly number of automobiles produced by European sports car manufacturers have also found their way into royal coach houses.

Take Ferrari for example. Within the first ten years of production, well over two dozen V-12 powered road-going Ferraris have found a first home with a titled personage or royal house in Europe or Asia. Names like Prince Bernhard of Holland, the Aga Khan, the Shah of Iran, King Faisal, Emperor Bao Dai of Indochina and Prince Bertil of Sweden were all owners of new Ferraris in the 1950s. And the list goes on.

A handful of these special Ferraris have become so associated with their famous first owners that even today they are as well known by their royal owners’ names as they are by their Ferrari model name or type number. Take, for example, the King Leopold Ferrari, a one-of-a-kind 375 Plus Special Cabriolet (serial number 0488 AM). The car was built near the end of a very limited run of 375 Mille Miglia and 375 Plus spyders and berlinettas, especially for the ex-King of Belgium.

Ferrari aficionados today usually refer to the car as the “King Leopold Ferrari” rather than as a one-off 375 Plus. Interestingly, although the car is so closely identified with the Belgian King, it was not the first Ferrari purchased by King Leopold. That honor goes to a 342 American Pinin Farina Cabriolet serial number s/n 0234AL, built two years earlier. But because of the visual impact and performance of the second Ferrari, it is likely that s/n 0488 AM will forever be known as the “King Leopold Ferrari.” 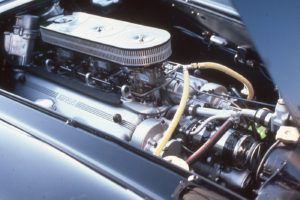 Fit for a king and modified to suit.

The Lampredi “big block” was originally conceived at 3.3 liters in 1949 and soon increased to 4.1, then 4.5 liters. The additional horsepower that resulted finally insured its competition success and Aurelio Lampredi was soon promoted to Ferrari’s chief designer.

The Kings Famous Car is One-of-a-Kind

The 4.5-liter engine used in the street version cars retained the design elements of the racing version, including cylinder barrels that were threaded into the engine’s heads, which helped eliminate head gasket failure, and oil distribution via tubes and pipes located outside the motor rather than through passageways cast within the block. The only significant variant between racing and street versions seemed to be in the carburation – no four-barrel Webers were used on the street engines.

Because the Grand Prix version of the engine contained no provision for a starter motor, that accessory had to be fitted to the clutch housing’s left side on street 375 Ferrari engines. These were manufactured with a casting that formed into the lower left half of the rear main bearing, which was specifically designed to accommodate the starter motor. 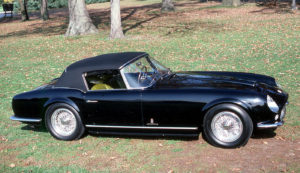 A strong Pinin Farina design, and one of the most beautiful Ferraris ever built.

Although the Paris Auto Show in the fall of 1953 was used by Ferrari to premier the road-going 375 America series, no such formal introduction was afforded the racing 375 Mille Miglia and 375 Plus models. Instead, the competition 375s first appeared with the beginning of the 1954 racing season at Casablanca, on December 20, 1953.

A total of 32 375 Mille Miglia and 375 Plus Ferraris were built, most with Pinin Farina bodies. There were 22 spyders, seven berlinettas, two coupes, and one cabriolet, the King Leopold car.

The Design of the Kings Car Appears Year after Year

The King Leopold Ferrari is one of the most beautiful and elegant open-bodied Ferraris ever created, a design that was destined to be a major factor in influencing the development of Ferrari cabriolets and spyders for the next nine years. For example, the sweeping lines of the front fenders and the style of the covered headlights were to be found on the Series One cabriolets built between 1957 and 1959, and on both the long and short wheelbase 250 GT California Ferraris of the late 1950s and early 1960s. Also, the shape of the oval grille can be found on the 410 Sport spyders built for the 1955 racing season, and elements of the design from the nose, hood, and fenders of the King Leopold Ferrari appear on the 1956 290 MM roadsters, the 860 Monza spyders and the 1959 Testarossa spyders. 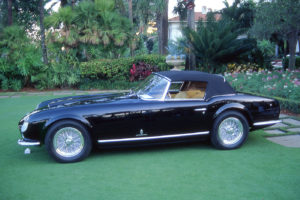 S/N 0488 AM is perhaps the most influential and important Ferrari road car of the 1950s.

For many years Wayne Golomb, an attorney formerly living in Springfield Il, has owned the car. It is one of the three Lampredi engined Ferraris owned by Mr. Golomb (the other two being the Rossellini/Bergman 375 and the Gianni Agnelli Ferrari). All three cars were recipients of ground up restorations while under his ownership.

After spending its middle years in red paint and black leather, the King Leopold car was returned to the unusual combination of a jet black exterior and an apple green interior (now a tan interior). It is also unusual in that its dashboard contains not only the normal complement of gauges, but an altimeter is located in the glove box door and to its left, an average speed indicator.

Tragedy Strikes the King, Heroics and Love Save the Ferraris

King Leopold of Belgium was born November 1, 1901, in Brussels, and reigned as King of the Belgians from February 2, 1934, until he abdicated the throne on July 16, 1951. He received his education at Eton College, U.K., as well as the St. Anthony Seminar in Santa Barbara, CA.

As a young man he developed a passion for automobiles, particularly Bugatti, and in the 1930s, he owned a Type 57 Special. In 1926 he married Princess Astrid of Sweden and they had three children. The marriage ended tragically on August 29, 1935, along the shores of Lake Lucerne when the King lost control of the Packard Cabriolet he was driving and plunged into the water, drowning his wife Astrid, who was pregnant with her fourth child. The King survived.

With the invasion of Belgium by Germany in 1940, Leopold was taken prisoner when he refused to flee from his country. While in custody in Brussels, he married Mary Lilian Baels, whom he had met a few years earlier in England. She was given the title Princess of Rethy, becoming known as Princess Lilian de Rethy. She spent the remainder of the war years imprisoned with the King. U.S. Forces freed the couple in May of 1945.

After the war and his abdication, King Leopold began pursuing interests in social anthropology and entomology, and along with Princess de Rethy, rekindled a long dormant interest in high-performance automobiles. Although they owned a Cadillac and a Corvette, their primary interest was in the cars from Maranello. Each of the five Ferraris they owned was a very special and unique automobile, and all, save the first, were ordered through Jacques Swater’s legendary Garage Francorchamps in Brussels. 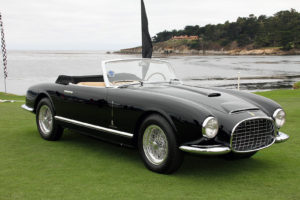 The first Ferrari was a 1953 342 America cabriolet by Pinin Farina, one of three such Ferraris bodied by Pinin Farina. Finished in black with a tan and brown interior, it was the second of the three cabriolets. Chassis number 0234AL was traded in on Ferrari number three, his 375 Plus cabriolet, the subject of this article. 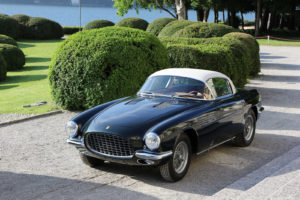 The second Royal Belgian Leopold Ferrari was a Vignale bodied coupe built for Princess Lilian de Rethy in 1954. It was a 250 GT Europa, chassis number 0359GT and finished in a dark green body with a very unusual off-white vinyl roof and tan leather interior. It was the last Ferrari bodied by Vignale in the classical era. 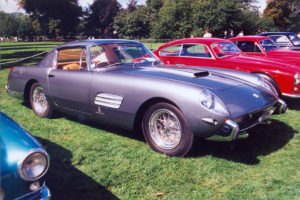 Fourth on the list of Royal Belgian Ferraris is another coupe, a unique smoke-grey Pinin Farina bodied 250GT, chassis number 0751GT, delivered on January 25, 1958 specifically built for Princess Lilian de Rethy. It was similar to the Prince Bernhard 250GT chassis number 0725GT, sans the trio of vents on the sail panel. Upon meeting the famous heart surgeon Dr. de Blakey (who was from Texas), she donated the car to him, as she was about to take delivery of the fifth of the Royal Belgian Ferraris.

Enzo Remembered the King as Gifted, Courageous, and Regretful 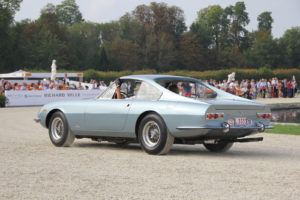 The fifth and last Ferrari was a special 330GTC coupe bodied in steel by Pininfarina and delivered after the January, 1967 Brussels Motor Show. Chassis 9439 was finished in metallic silver/blue with a black interior. The car stayed with the Princess until she passed away on Jun 7th, 2002 at the age of 85.

Because of his many visits to Maranello, King Leopold and Enzo Ferrari became good friends. Talking about the King, Enzo Ferrari said, “…he seemed to me to be a man who would have made a good engineer; a man gifted in technique and who bitterly regretted not ever having been able to follow his inclinations….at the wheel I found him courageous and able to confront danger with resolution and skill.”

The King lived until September 25, 1983, never losing his interest in high-performance machinery.

Thank you to Editor Pete Vack of VeloceToday.com and author Alan Boe for allowing us to reprint The Royal Ferraris of Belgium.