The Canadian Grand Prix is the biggest sporting event in Canada—it attracts over 100,000 people daily and lasts for three days. The annual auto race has been held in Canada since 1961 and is sometimes referred to as The Montreal Grand Prix. 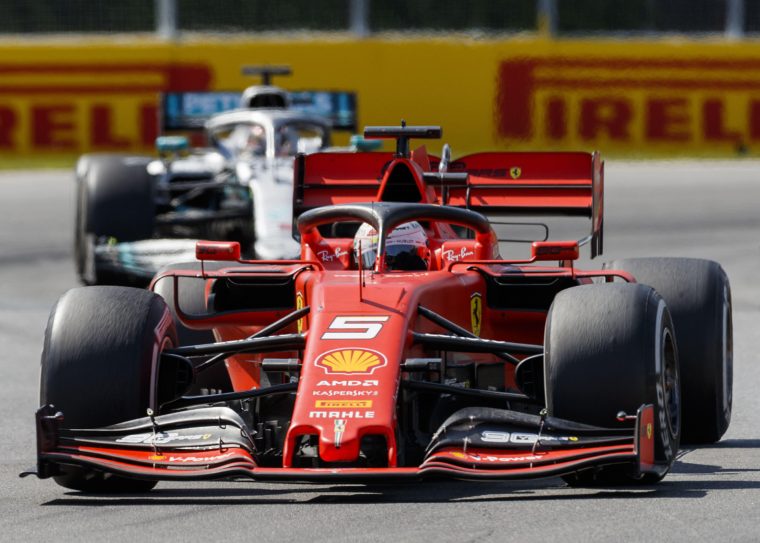 It started as a sports car event in Ontario, alternating between there and Quebec, and became part of Formula One Championship Racing in 1967. In 1978, after safety concerns with both locations, the Canadian Grand Prix moved to its current home at Circuit Gilles Villeneuve on Notre Dame Island in Montreal.

How fitting that the first winner in Montreal was Quebec native Gilles Villeneuve, driving a Ferrari. Villeneuve won only six of his 67 Grand Prix races and never achieved a world championship, but history goes beyond numbers. The racing world will remember the diminutive French Canadian as one of the sport’s greatest competitors. Perhaps Villeneuve’s finest moment was his performance in a practice session for the US Grand Prix East at Watkins Glen, New York in 1979. His Ferrari teammate Jody Scheckter, the new world champion, was confident of being the fastest on the track until he looked at the timesheets—Villeneuve was 9.5 seconds quicker.

Three years later, a horrific accident on his final qualifying lap for the 1982 Belgian Grand Prix claimed Villeneuve’s life. A few weeks after his death, the racetrack in Montreal was renamed Circuit Gilles Villeneuve. Villeneuve is one of the first people inducted into the Canadian Motorsport Hall of Fame and is the only Canadian winner of the Formula One Canadian Grand Prix.

The Wall of Champions and Its Stolen Dreams

The final corner of Circuit Gilles Villeneuve became well known for crashes involving former Formula One World Champions. The wall initially had the slogan Bienvenue au Québec (Welcome to Quebec) on it. Over the years many Champion drivers crashed into the same area of the wall, and it became ironically known as “Wall of Champions.” Some of the drivers that have gotten to know the wall well include Damon Hill, Michael Schumacher, Jacques Villeneuve, and Ricardo Zonta, FIA GT sports car champion at the time. Other Formula One World Champions Nico Rosberg, Jenson Button, CART Champion Juan Pablo Montoya, Formula Renault 3.5 Champions Carlos Sainz Jr., and Kevin Magnussen have fallen victim to the wall as well. And before it was even named the “Wall of Champions,” it crushed the dreams of Derek Warwick, 1992 World Sportscar Champion and long-time Formula One driver, when he crashed his Arrows-Megatron during the 1988 Canadian Grand Prix qualifying runs.

And on a Friday practice day in 2011, the wall claimed 4-time Formula One Champion Sebastian Vettel.

Is it possible Vettel became the victim of another thief on the same racetrack?

On Sunday, June 9, 2019, Sebastian Vettel led the Canadian Grand Prix race from the start. He converted his pole position into first place and held that lead all through the pit stops. Once the hard tires were put on his car to finish the race, Lewis Hamilton, in his Mercedes, started to pile the pressure on Vettel. He rejoined the race after his pit stop on lap 29 five seconds behind Vettel and ten laps later was on his tail where he stayed within one second for the next nine laps.

Judgment Error at 180 MPH and Your Control is Lost

And then, with only 22 laps remaining in the race, Vettel’s Ferrari ran wide entering the challenging Turn Three/Four chicane and ran over the grass on the second, left-hand part. As Vettel rejoined the track, Hamilton went to overtake him on the outside, but there was less than a car’s width, and the Mercedes driver had to back off.

In a controversial decision, officials of The Fédération Internationale de l’Automobile (FIA), the governing body of racing organizations since 1904, issued a five-second penalty to Ferrari driver Sebastian Vettel for “re-entering the race illegally and unsafely.”

Vettel insisted he’d done nothing wrong and did not deliberately hinder Hamilton as he rejoined the track. But FIA race stewards disagreed, handing Vettel the penalty because they felt he continued to move across the track after regaining full control of his car. They thought he could instead have remained on a line that allowed Hamilton space, and believed video footage of movements of his steering and head suggested he had seen Hamilton and knew where he was.

Live recordings from over the radio between Vettel and his pit crew went something like this.

Vettel—“I had nowhere to go. Where the hell am I supposed to go? I had grass on my wheels! It’s his fault if he decides to go that way. If he’d gone to the inside, he’d got past me!”

Vittel—“I am focused, but they’re STEALING THE RACE from us.”

Is it possible Vettel became the victim of another thief on the same racetrack?

The four-time champion may have won on the road, but the five-second penalty cost Ferrari another victory making 2019 a year in which Mercedes has won every race. Third place went to Vettel’s teammate Charles Leclerc giving Ferrari two spaces on the winner’s podium.

There are three spots on the winner’s podium. This year only two cars appeared.

Vettel had pulled over in the pit area long before the podium and pushed his car backwards into the garage of the governing body, FIA. He then stormed off into the Ferrari area, and it appeared he was not going to the winner’s podium. A Formula One official convinced him to head to the podium, and they walked through the Mercedes garage to get there. 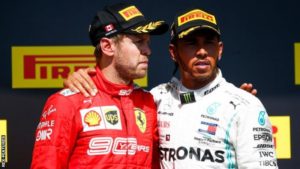 On the way, Vettel moved the number one board from in front of Hamilton’s Mercedes to the empty space where his car should have been.

Next up is the French Grand Prix on June 23, 2019. Unfortunately for Ferrari, the track layout is likely to favor Mercedes, and that first win for the red cars will probably have to wait a little while longer.

One of my friends thinks Ferrari got robbed. He says if the situation was reversed, Hamilton would have gotten away with it. What do you think? Was the race stolen, or did Vettel make a mistake and re-enter the race unsafely. Let us know in Comments below.

And, if you have any Ferrari or other classic car stories, share them here.