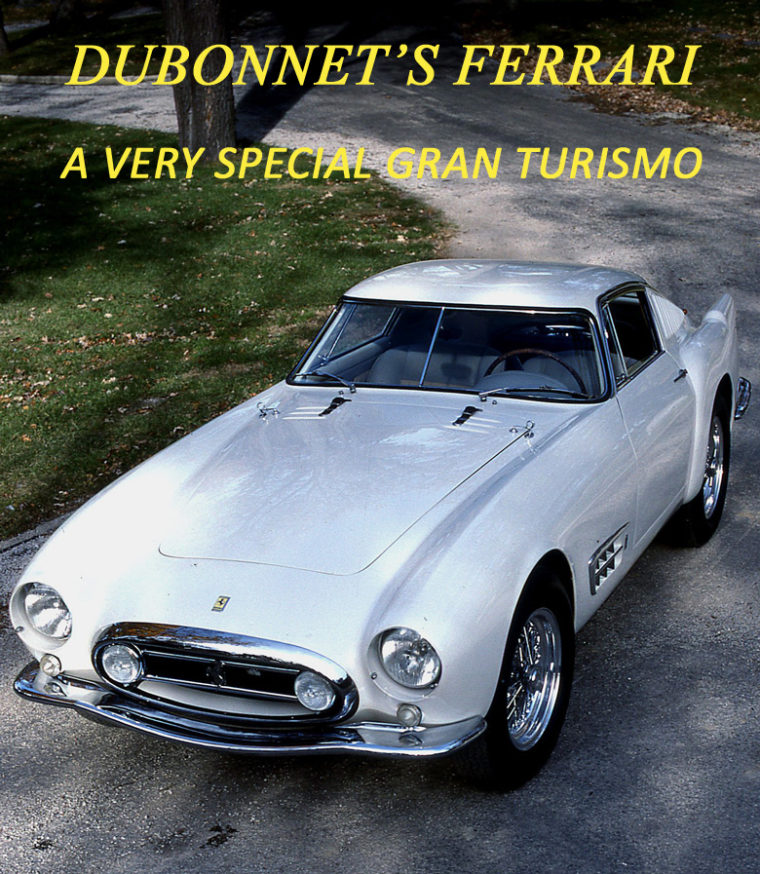 That’s because it’s a word that, if not actually coined by Ferrari, was put into the auto enthusiasts’ vernacular by the use of the term by Enzo Ferrari.

Literally, ‘Berlinetta’ means little Berlina or little sedan. But not all little sedans are Berlinettas. It took Enzo Ferrari and the car he produced in the 1950s to give definition and meaning to the term. Fastback body styling was one characteristic Ferrari’s Berlinetta all shared. None could accommodate more than a driver and passenger. Most were bodied in weight saving aluminum and most exhibited great performance potential. 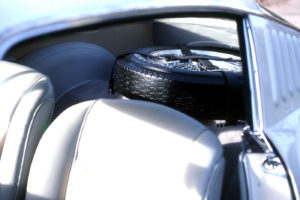 Always strange for a GT car was the lack of luggage space, but not unusual for Ferrari. One wondered how far the grand tour would be going; not overnight one suspects.

The majority of Ferrari’s early Berlinetta models were designed for racing in the GT classes or were true dual-purpose road and track automobiles. And certainly, more than a few of the early Berlinettas were merely roofed-over sports cars. Spartan interiors, Plexiglas side, and rear windows, no bumpers, minimum sound deadening—all were characteristics of Ferrari’s racing Berlinettas.

Birth of the Berlinetta

Where did it all begin for Ferrari? Certainly, some of the early 166 Touring and Stabilimenti Farina bodied Ferraris exhibited Berlinetta traits. Vignale created Berlinetta bodies for Ferrari on the 212 and 340 chassis, and a good number of the 375 Mille Miglia Pinin Farina-bodied Ferraris of 1953 were Berlinettas. But it wasn’t until the advent of the 250 Mille Miglia GT competition cars in 1953 that Ferrari began to series produce a Berlinetta automobile. The model’s lines owed its great looks to the 375 MM Ferrari Berlinetta, only slightly scaled down to fit the shorter 250 MM chassis. Some nineteen of these svelte beauties were constructed through the joint efforts of Pinin Farina and Ferrari. Also in the early 1950s, Ferrari began to produce an increasing number of fast, road going passenger vehicles, the Europa series of cars being the first major concerted effort in that direction. While these cars can’t be considered Berlinettas, sprinkled in amongst the Europas was an occasional one-off exhibiting true Berlinetta styling. One such car is chassis 0393 GT, the subject of this article.

A quick glance at the car might lead the casual Ferrari observer to surmise that 0393 GT is a long wheelbase “Tour de France” Berlinetta. Not so. Although 0393 GT is one of the first Ferraris to carry the lines of the 250GT LWB, that was yet to come. Three special Berlinettas built just before 0393 GT were required before the TDF body lines of Ferrari and Pinin Farina emerged. These three cars (0369 GT, 0383 GT, and 0385 GT) all looked more like the 250 MM Berlinettas than the TDF, but the development, and refinement of the Ferrari Berlinetta was taking place. 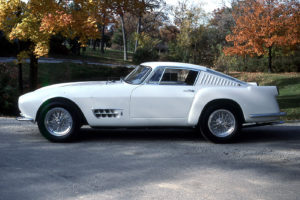 A clear resemblance to the later Ferrari TDF

Ferrari On Display at the Paris Auto Salon

Finished in September of 1955, 0393 GT was sent immediately to the Paris Auto Salon in October for display by Paul Vallee, whose company, Autoval, was selling Ferraris and other cars in Paris. However, 0393 GT was already the property of Andre Dubonnet, of the aperitif Dubonnets of Paris, having been purchased by Dubonnet before the show.

The car can be described as a special competition 250GT Berlinetta. The Factory build sheets for the car state that, upon completion, it was to be sent to the Paris Salon as a “1955 Berlinetta tipo MM azzurra,” a blue hue. It is built on a 2600 MM tubular chassis and powered by a three-liter single overhead cam V-12, topped by three 36 DCZ/3 Webers. According to the build sheets, maximum horsepower is 214 at 6500 rpm, with a four-speed gearbox. 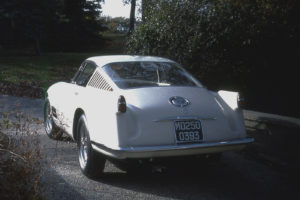 There was no trunk, and therefore no trunk lid, since the rear end was taken up by the spare tire and gas tank.

Although Mr. Dubonnet had enjoyed a fairly successful career as a racing driver in the years leading up to WWII, it appears that he never raced 0393 GT during the eight years he owned it. Probably as close as the car ever came to turning a lap at speed was in 1956 when Dubonnet planned to run it at Le Mans with Maurice Trintignant as his co-driver. But Dubonnet broke his foot before the race, 0393 GT was scratched, and Trintignant went on to partner with Oliver Gendebien in a Factory-entered Ferrari 625 LM, finishing third overall.

Records show that Dubonnet returned the car to the factory for rear axle changes in 1955 and 1956 and that it spent a considerable amount of time being serviced by Franco Brittanic Autos, the Rolls-Royce/Ferrari outlet in Paris. This has led to speculation that the car was raced hard. In fact, it now appears that Dubonnet, who was a very good engineer (he designed the Dubonnet front suspension for the P3 Alfa) was also very fussy when it came to the performance of his special Ferrari. 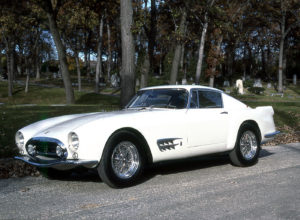 And note the absence of the standard egg-crate grille. A PF experiment or a Dubonnet request?

By 1963, Dubonnet had decided to part with 0393 GT and an American Air Force Staff Sergeant, Richard De Jagger, purchased the car through Garage Moloff, the Abarth importer in Paris. De Jagger kept the car three years before turning it over to another American serviceman, Robert Spencer, who was stationed in Kaiserslautern, West Germany. Spencer kept it until 1980, when he sold it to Dr. Ron Mulacek of La Grange, Illinois. By this time it was in need of total restoration, and thus began a ten-year rebuild of this very special Ferrari.

As with many major restorations, the talents of numerous people were needed, including John Hajduk, Jim Riff, Pete Sanchez, and Skip McCabe. While they worked on the car, Bill Leahy reconstructed the rear fender fins that had been removed by a shop in Livorno, Italy in the mid-60s. Leahy also recreated the grill surround and the horizontal bars behind it. And much of the assembly work was done by owner Ron Mulacek and completed in 1990. Barchetta.com lists the current owner as Dennis Machul.

Many details were seen only on a few other Ferraris, such as the oval front air intake, the front bumper that was looped under the grille, the streamlined headlight cover with no chrome trim, the chromed and sculpted heat escape vents on the side, and the rather abrupt taillight treatment. 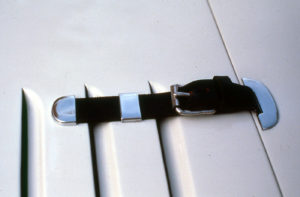 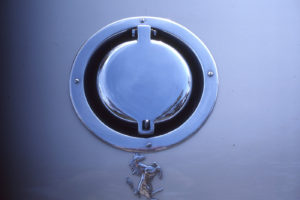 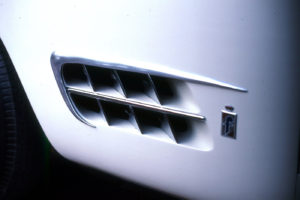 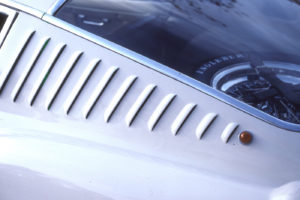 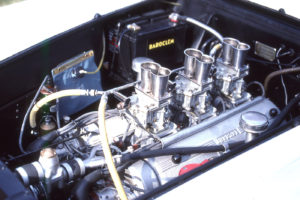 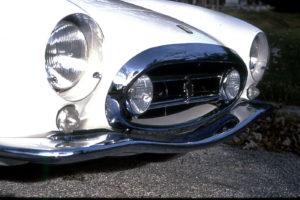 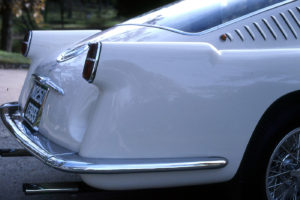 Thank you to author Alan Boe and Pete Vack, Editor of VeloceToday.com for allowing us to reprint the story of S/N 0393 GT.

In the next post learn how to sell cars in a library parking lot.