After all these years, February 20th, or is it February 18th, is still celebrated for the man, and the brand he created. Is there anyone on earth that doesn’t recognize the name Ferrari?

Our March 5, 2018 post titled “Two Passionate Men with a Similar Vision and Dream,” told how Enzo was born on February 18, 1898, during a heavy snowfall that delayed registration of his birth for two days. Years later, when he discovered his official birth certificate read February 20, 1898, he decided to celebrate two birthdays, the 18th and the 20th. He liked being different.

Last week, the Ferrari Club of America (FCA) Southwest Region held their annual birthday celebration for Enzo Ferrari at the famed Petersen Automotive Museum. Founded in 1994 by Robert E. Petersen, the publisher of Hot Rod Magazine, Motor Trend Magazine, and several other magazines, the Petersen Automotive Museum is one of the largest in the world. 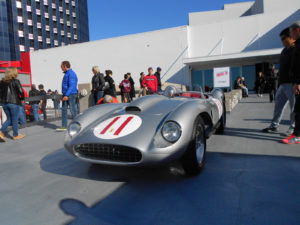 It used to be that the weather was not something you worried about when planning a car show in Los Angeles. After all, it only rained about a week a year. Not so anymore.

As Enzo’s birthday approached, the events staff worried they would get rained out. Ferrari owners signed up to show their cars, but with rain forecasted the idea was to get there, show your car, and split. No one could predict how many people would walk around peering under umbrellas at the vehicles on display in the outdoor parking lot.

But on the morning of February 17th, the sun emerged surrounded by nothing but blue sky.

The event started the evening before with a VIP reception for those in the Petersen VIP group. Held on the fourth floor of the parking structure with a fantastic view of Hollywood and the Hollywood Hills, the party featured three guest speakers. Derek Hill, son of race pilot Phil Hill, Michael Leventhal, a significant Ferrari collector and Bruce Meyer, a Petersen Museum board member, and notable classic car collector. The three of them comprised a panel that discussed subjects rarely heard.

Derek told how his father, famous Ferrari race driver Phil Hill, took more pictures as a race driver than many photographers. Following in his dad’s footsteps, Derek is also a race driver and has made it a labor of love to put his dad’s photos into a series of splendidly produced hardbound books. What is charming about the books is that fellow drivers and crew of those long ago racing teams were not tensed up when Phil was taking pictures because, hey, he was part of the scene (Le Mans winner in fact). Derek’s mom was there too, and she is always good at making a wisecrack.

Mr. Leventhal told of the many significant cars he mistakenly sold. This included a short wheelbase Berlinetta in alloy that he sold because someone in Europe was making a copy of it and had found the correct engine. Thinking this invalidated his cars’ history he sold it and found out later that his was the real thing (Not to worry, he does own a very early Barchetta that is a valuable artifact as well).

Bruce Meyer confirmed a secret I had only heard once from author Hans Tanner. He told how Ferrari with their works cars and some private teams would switch chassis plate numbers before going through customs so they wouldn’t have to pay duties. The switching plays hell with historians decades later in trying to find out which car raced where.

Mr. Leventhal went on about his personal belief that all three of them have driven now-historic cars on many events and driven them hard. He is amazed by some of the new modern day owners he meets, the idea of flogging their car on tours hasn’t occurred to them. He gave the example of meeting someone bragging about owning a 288 GTO with “only 400 miles on it.” He thinks that the joy of these cars is driving them. Bruce Meyer, who later displayed his silver Testa Rossa, said he drives his cars on the street every chance he gets.

On show day, the weather was sunny and bright with easily 100 cars showing up, probably half of what would have come if the weather reports weren’t so foreboding. Not too many were “historical” like Bruce Meyer’s silver Testa Rossa, but there was also a Lusso and a Boxer and a Dino. Most of the rest were newer cars, including very new ones.

There was one Italian racecar not in the family back then, a Lancia Stratos but I am sure many were glad to see it. And, hey, didn’t Enzo once manage a Lancia team?

One car that stood out as being dowdy and not even in the same family so to speak was a Dino coupe by Bertone, one of the front engine models. These cars are a lot less desirable than the curvy Dino roadster by Pininfarina, and it’s too bad no roadster was there to compare to see how two coachbuilders, given the same chassis, took such different routes. 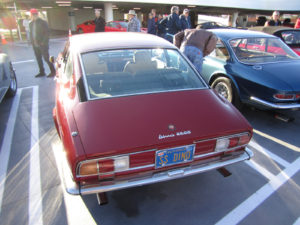 Sometimes it’s the Clothes that Make the Party

I enjoyed seeing the personalized style clothing worn by many, from my favorite leather jacket with Ferrari patch to shapely outfits by the ladies, of course favoring the color Rosso Corsa. 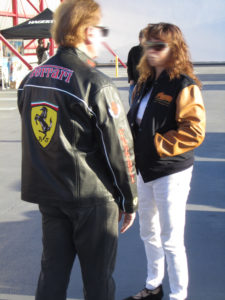 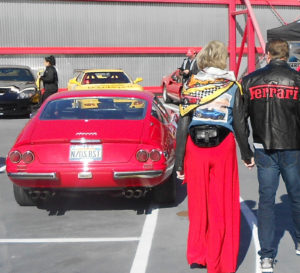 The Petersen Museum had a small booth selling model cars and Mr. Hill’s book. I was amazed to see a die-cast model of Mr. Meyer’s short wheelbase 250GT right down to the blue race stripes. These weren’t just models you’d find at Costco. I hope the Petersen Museum store strives to have more “curated collectibles,” like the Museum store in the Mullin Museum in Oxnard, California.

While the crowd consisted mostly of FCA folk, the Petersen Museum should be lauded for being generous in their policy of letting anyone come in off the street to their outdoor cruise-in shows at no cost. Now if the off-the-street visitors want to go inside the Museum and see the displays, they have to trek down four floors to the ticket office and buy an admission ticket. Think of this event as about 1/10th the size of Ferraris on Colorado Blvd (held in Old Town Pasadena). Both shows are free to the public, but this one even included free bagels and coffee… 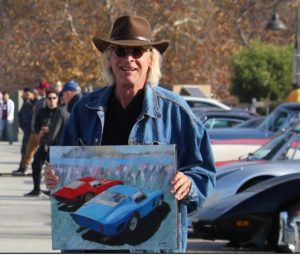 THE AUTHOR: Wallace Wyss is a fine artist whose artwork can be found at Concorso Italiano in Monterey. For a list of available prints or to talk about a commission for your car’s portrait, write to Wallace at mendoart7@gmail.com.