Henry Ford II – aka Hank the Deuce –  thought he had a deal. After months of negotiation, he sat on a plane to Maranello, Italy, visualizing himself signing a contract with Enzo Ferrari.

The meeting, set for the 4th of July 1963, wouldn’t involve Independence Day fireworks and a barbeque, but it would be exciting. The $10 million price that the Ford Motor Company planned to offer Enzo equated to a half share in the famous Italian sports-car maker.

Like Henry, when they heard the news, most Americans expected the two companies to merge. Two months earlier, in May 1963, Time Magazine® ran a story that reported: “The companies have already started design work on a new, prestigious ‘Ferrari-Ford,’ which will have a powerful 12-cylinder engine in a Ford sports chassis.”

“The companies have already started design work on a new, prestigious ‘Ferrari-Ford,’ which will have a powerful 12-cylinder engine in a Ford sports chassis.”

The deal never happened, and neither did the Ferrari-Ford sports car.

Why did Enzo pull the pin on the deal at the last minute, leaving Henry high and dry?

Here’s the story, as told by a Ford vice president that participated in the negotiations.

Car Racing Would Never be the Same

By early 1963, executives within Ford Motor Co.—Lee Iacocca among them—recognized the marketing appeal of auto racing and decided the company could benefit from a successful racing program. Seeing that Ferrari dominated the most prestigious race of all, France’s 24 Hours of Le Mans, Henry decided to approach Enzo with a plan to acquire his company.

About the same time, Ford of Germany learned of Ferrari’s interest in a merger with Ford. In March, Ford proposed a buyout that would leave Enzo in charge of racing, and turn production of the road cars over to Ford. The proposed deal would allow Enzo to do what he loved most, build racecars.

The Indianapolis 500 Race and an Interesting Dream

Phil Paradise, general manager of Ford Italy, approached Enzo with the idea of forming two companies out of a merger. Ford-Ferrari would build and sell the kind of expensive sports and GT cars made by Ferrari. Ferrari-Ford would serve as the racing company. After all, Henry knew that Enzo disliked building road cars and did so only to fund his racing program. Henry also wanted to use the publicity and engineering developments from racing activities and have the right of first refusal to purchase Enzo’s remaining equity.

The negotiations were moving along so smoothly the group had begun discussing emblems they might use on their cars. Enzo and Henry decided Ferrari would sketch out possibilities that combined the two companies crests and names.

Enzo showed a lot of interest in the Indianapolis 500-mile race and announced Ferrari had a couple engines designed with that race in mind. However, when the discussion turned to the racing company, especially details of who would run it, Enzo started to have concerns.

The following video may explain Enzo’s interest in the Indianapolis 500-mile race.

An Overwhelming Silence in the Room

Enzo indicated that a severe conflict might exist with Shelby American, Carroll Shelby’s US company that built racing cars similar to Ferrari. Henry had developed a relationship with Carroll. When asked to discontinue the relationship, Henry related that he had an obligation to Shelby, which upset Enzo.

Then Henry questioned Enzo: “What if we want to race Ford promoted GT cars at Le Mans?”

Enzo showed a lot of interest in the Indianapolis 500-mile race and announced Ferrari had a couple engines designed with that race in mind.

The meeting ended abruptly, and no more was ever said about the merger. After ten days of negotiations, the Ford team received a phone call from one of Ferrari’s lawyers; there would be no further discussion because there would be no deal.

Executives at Ford headquarters in Dearborn, Michigan, were stunned.

Immediately, he created the Ford Motor Company racing “dream team,” which included Carroll. It had one mission– humiliate Enzo’s red sports racers in the Le Mans 24-hour race. In 1966, after two years of disappointments, Henry succeeded and continued to defeat Ferrari for the next three years. His company did it with the Ford GT40, a car birthed by Enzo’s refusal to merge the companies. 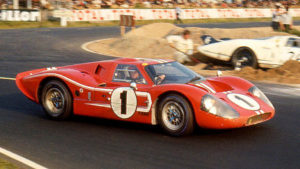 The following video, “How an Underdog passes a Big Dog,” highlights the story.

Isn’t it funny how new things are invented when someone says “no”? Being told you cannot do something seems to bring out your best. If you have a story about something accomplished after being told no, please leave a comment below.

In the next post, a few theories are shared on how sports car racing might have changed if Enzo had said “yes” to Henry.