Ferraris have appeared in many movies, but only one Ferrari had a blind man behind the wheel. In Scent of a Woman, blind Lieutenant Colonel Frank Slade, played by Al Pacino, drove a Ferrari Mondial T Cabriolet on the backstreets of New York. 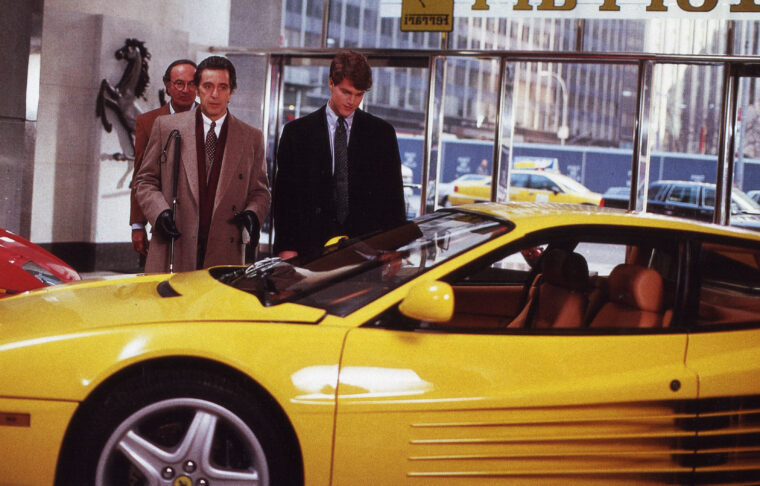 The 1992 movie won Al Pacino the Academy Award for Best Actor, along with Golden Globe Awards for Best Screenplay, Best Actor, and Best Motion Picture. In 1994 it won the BMI Film Music Award. A great movie for sure, the Ferrari drive became a classic, along with the Thanksgiving family dinner scene.

If you missed the movie, click on this video to watch the car scene. If you’ve seen the movie before, you might enjoy seeing the scene again. I certainly did.

How to Find Exotic Cars for the Stars

Ferraris appear in many movies, but only one Ferrari had a blind man behind the wheel.

Brian Burnett had the rich and famous showing up at Ferrari of Los Gatos regularly. Many of them were quickly recognizable from movies or professional sporting events. While the Ferrari dealership had become well known, some of its customers didn’t enjoy that status and wanted to keep it that way—mainly people with undocumented cash income.

The May 2018 post title, “An On-Time Delivery that Took All Day,” highlighted the story of one such customer living in the Santa Cruz Mountains near Los Gatos. The cash-only transaction included watching The Long Riders movie and took all day to complete.

Dennis Glavis, a Ferrari of Los Gatos sales manager, said, “One of the toughest parts of the job was counting cash. Those customers would come in after we closed with bags and briefcases full of cash. Sometimes, we’d be counting after midnight.”

Brian and Ferrari of Los Gatos were legendary in helping to build the North American market not only for Ferrari but other exotic cars as well. It’s a shame Brian had to lose the business, in part because he did too good of a job becoming successful.

If you have a good, or bad, dealership story, please share it here, or leave a comment below.