The movie, Ford v Ferrari, debuts on the big screen Friday, November 15, 2019. As a guest of the Peterson Auto Museum, Wallace Wyss had the opportunity to attend a preview of the movie a few days before its official opening. Here is a reprint of his review courtesy of Mike Gulett from mycarquest.com. 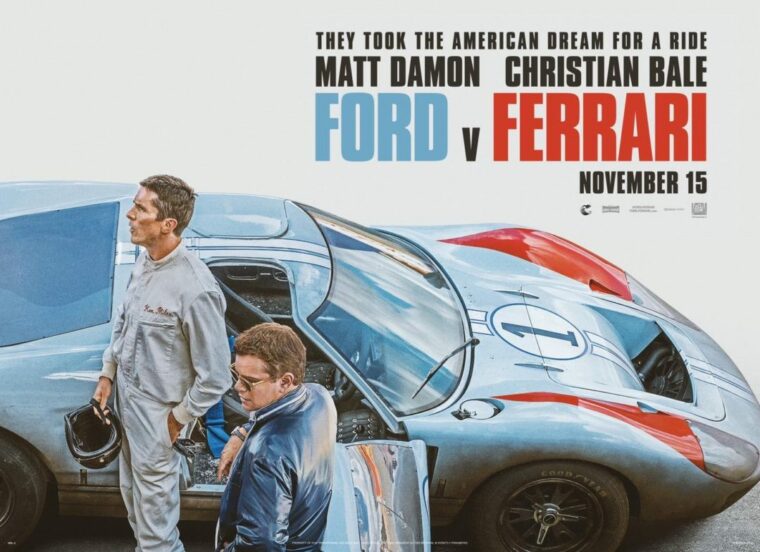 The trouble with most racing films is that the producer and director think the audience will be satisfied with lots of zoom-zoom shots and occasional glimpses of the race driver’s lives.

Veteran Hollywood producer and director James Mangold made Ford v Ferrari. He told interviewers he’s not a car guy but knows how to tell a story.

It’s a story of two buddies, both car racers, and how one vaults himself into a race team organizer role and hires the other as his lead driver.

The man who propels himself from the racetrack to the office is Carroll Shelby, a tall in the saddle Texan who had so many things going on in his life that it’s hard to squeeze even a bit of it into this film.

The Life of Carroll Shelby—Worthy of a Movie

Shelby is a WWII veteran, a failed chicken farmer, a self-taught car racer, a horse breeder, a car builder, a big game hunter, oh, and Le Mans winner (’59 for Aston Martin). You just knew there would be a movie about him eventually.

But this is not at all an attempt at a definitive life story. No, this is only a slice of his life from 1962 to 1966, when major American automaker Ford decided to challenge leading sports car builder Ferrari at the world’s best-known automobile race, 24 Hours of Le Mans.

Mangold manages to tell the story from a personal point of view so that, even if you know nothing about racing, you see the conflicts and sympathize with various people in the movie. Christian Bale’s portrayal of Ken Miles, the stubborn British car racer employed by Shelby, is so good that it’s hard to sympathize with this brash immigrant, who always manages to spoil his opportunities by venting his opinion.

The Miles character dominates the story, while the Shelby character is in and out of the story as he comes in to clean up Miles’ latest faux pas.

In a way, it’s a traditional buddy-buddy movie, something like Butch Cassidy and the Sundance Kid. 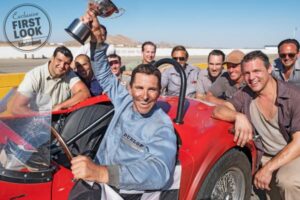 Just as the racers on the Shelby team are fighting internally with their sponsor Ford, their sponsor is shown fighting with Ferrari. Actor Jon Bernthal plays Iacocca (he doesn’t look like Iacocca but does a great job acting the part) and he convinces Henry Ford II that if Ford can beat Ferrari at Le Mans, it will be great for Ford’s further business ventures in Europe.

Henry Ford II states that Ford makes more cars in a day than Ferrari does in a year, causing the audience to assume Ford is Goliath and Ferrari is David. However, Ferrari has so much racing experience, it’s the other way around, and the movie is about Ford hiring Shelby to shape up their endurance race car.

As far as casting, I was dubious of Damon playing Shelby—he’s too short for one thing. Even at the wrong height, Damon played the role convincingly. Since I knew Shelby personally, I knew he had a jocular manner and, at times, could be hard as nails.

Damon was doing the easy-going aw-shucks Shelby for most of the film, but he had his hands full with Bale stealing most of their scenes. And, naturally, the audience sympathizes with Bale because you get Miles’ back story all the way through (a WWII British Army veteran in Africa and Europe, and an inept businessman who alienates customers by expressing his opinions in no uncertain terms). Once Shelby signs him on as a driver, he is required to go around and put out the fires Miles has started with his unvarnished opinions.

There’s also a family side of the story that shows how Miles’ devoted wife Mollie is satisfied with her husband being a shop owner, but he can’t handle the business and has to take a race driver job. His wife has an intense dread that Shelby is trying to involve her husband in something that is definitely on edge, involving cars that go 200 mph plus. 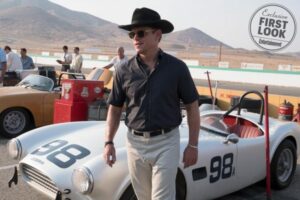 The Movie Puts the Audience Inside the Car

Past racing movies, except for Le Mans, had a lot of the same old whoosh-whoosh flybys of cars. Ford v Ferrari producers went to the trouble to build large rigs to hold the race cars giving the audience the feeling they are right down there at waist level in one of the cars on the race track.

There are a few incredible crashes, and a harrowing scene when Miles fails to get his door closed at the start of Le Mans. As he accelerates to nearly 200 mph, he’s fighting to close his door.

For those hoping to see Ferrari in half the movie, that doesn’t happen. The Ferraris get about 10% on screen time, and other car models get zilch.

In this film, Ford management is portrayed as ignorant, crude people in the business. That’s entertaining because an executive like Henry Ford II couldn’t possibly know everything that’s happening down at the race team level—he has to delegate responsibility. He appoints his old basketball coach, Leo Beebe, to run the racing program (the movie doesn’t reveal Beebe’s lack of race experience). Tracey Letts does well portraying Henry Ford II, but Josh Lucas, as Leo Beebe, is more memorable. At one minute, he’s trying to tell Shelby what to do, and the next minute, when Shelby’s intuition pays off, Beebe is proclaiming the success of “his” idea.

The running plot is that Beebe hates Miles but can’t get him fired from the team because Shelby has convinced Ford that he is vital.

The Italians only get a few minutes on screen, first when they are showing Iacocca and crew through the Maranello factory, and later when they are negotiating. The casting of Enzo Ferrari is perfect—the imperious air and Machiavellian posturing. I don’t know if it’s a fact, but in the film, Ferrari tells Ford to leave (which did happen) but implies the reason was that Ferrari was already negotiating behind the scenes with Fiat for a takeover (which technically didn’t occur until 1969). The film also shows the Italian pit crew shouting at each other when their car breaks down, and they realize Ferrari is going to lose at Le Mans.

Other Actors Portray Key Roles in the Movie

Also, sure to get a mention at Oscar time will be the portrayal of Miles’ wife, Mollie, played by Caitriona Balfe. It draws your sympathy that her husband had a sweet, safe life if he gave up racing, but he can’t seem to do that. It’s never clear how much of Miles’ zeal is due to wanting to win famous races or to make enough money to satisfy his creditors.

Director Mangold surprised an interviewer on YouTube by saying he had initially put together a 3½ hour version. If that is ever available, it will be much sought after by racecar fans; model builders, etc. because there, in the scenes cut out of the theatrical version, might be the answers to things like, why didn’t Ford try for faster Cobras instead of developing an all-new car, etc.

So we come back to the question, “Do you, Mr. Wyss, (author of three books on Shelby) like the film?”

“I can say I liked it on the personal story level. Basing my comments on the 2½ hour film I saw, I can say it’s a certain genre of film, like the space movies showing the trials and tribulations of early astronauts. It’s buddies in peril, only this time on racetracks instead of in outer space. It’s only a coincidence that this buddies-in-peril story takes place in the world of cars.”

“I believe that, eventually, the rags-to-riches story of one Carroll Hall Shelby will be told. Ford v Ferrari has opened the door for that to happen. I think this movie will be the beginning. Perhaps we will see the story told at more length, maybe in a TV series, maybe going back to his beginning as a car racer (after all his chickens up and died and he decided to go to a car race and the rest his history…). And a TV version could illuminate many different phases of his car building career.”

Ford v Ferrari is not without flaws but it opens the door to Shelby’s history. It is even a racing film that you could take a non-racer film buff to, and they might be happy with the story.

Thank you to author Wallace Wyss for letting us reprint his article as it appeared on Mike Gullett’s website mycarquest.com. Wallace is the author of SHELBY: The Man, the Cars, the Legend, and 17 other books. As a fine artist, he is portraying 60’s racing cars in oils. A list of prints is available by request from Mendoart7@gmail.com

Let us know what you think about Ford v Ferrari (or Lemans ’66 if you’re in Europe) in the comments section below.