Something magical takes place this week. On Friday, Garth Stein’s novel The Art of Racing in the Rain is coming to the big screen. This is a movie everyone should see. Lead actor Milo Ventimiglia said, “The making of the movie was like leaves falling on the ground, all landing gently in place and creating something beautiful.” 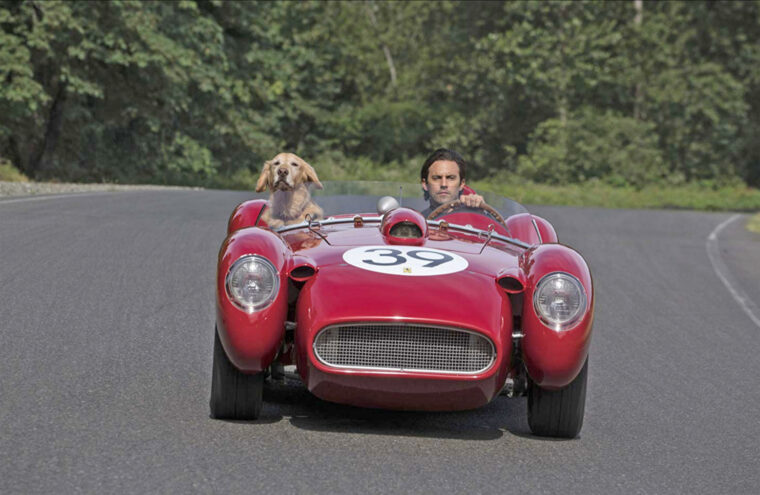 “The filming felt like magic happening. We weren’t forcing it or overworking it—it was just happening,” said Ventimiglia. “The audience will enjoy the movie because the cast truly, truly enjoyed making it.”

The film is about Denny, a racecar driver, and his dog Enzo. It takes place over the life of Enzo from a puppy until he’s old. Enzo narrates the film as he watches Denny going through auto racing, meeting a woman, falling in love, starting a family, and maneuvering the ups and downs of life.

Enzo sees a TV documentary and learns the Mongolian belief that dogs reincarnate and come back to life as a human. Understanding he’s currently a dog, he tries to soak up as much about humanity as he can from Denny and his family. In his next life, Enzo plans to apply everything he learns to become the best human being he can.

Weather conditions can bring horrible rain upon a race without notice. Much like weather, life can bring stress, trials, and tough times when you least expect them. Denny became an expert at finding a way to drive fast through pouring rain on a track saturated with rainwater. Enzo watched as Denny got through the challenges, no matter what. He learned that on the road of life, it’s not what happens; it’s how you react. Just like in racing, you must re-direct and course correct.

The Art of Racing in the Rain is another 2019 movie that tells a story with Formula One racing in the background. Similar to the upcoming movie Ford vs Ferrari, it’s an 109-minute in and out movie, suitable for the whole family, but it’s not animated, and it’s not a kid’s film. However, your kids will understand it. It’s a beautiful film put together by a lot of talented artists.

Don’t want to spoil anything, but you should probably bring some extra Kleenex to the show.

Garth Stein’s novel, The Art of Racing in the Rain, is coming to the big screen . . .

Best Formula One Rain Driver in the World

Brazilian Formula One Grand Prix driver Ayrton Senna is acclaimed for his wet weather performances. In his rookie year at the 1984 Monaco Grand Prix, driving in the rain, he had the fastest lap and took second place. The following year, at the Portuguese Grand Prix he qualified for the pole position, had the quickest lap, and won the race—again in the rain. In the 1993 European Grand Prix, Senna’s drive to victory is one of his finest. During the first lap of the race, in torrential rain conditions, he passed four other drivers to go from fifth to first. He ended up with the fastest lap and won the race.

Wonder if his real life story had anything to do with writing The Art of Racing in the Rain . . .

If you’re interested in a longer movie about Formula One racer Ayrton Senna, you should check out the 2010 documentary Senna. More like a movie, the film focuses on his racing career and relies primarily on archived racetrack footage and home video clips provided by the Senna family, and does not have any video interviews or formal commentary.

Let us know what you think about The Art of Racing in the Rain or any other Ferrari movie you’ve seen.

And, if you have any classic car stories, please share them here, or leave a comment below.