Selling racehorses isn’t much different than selling cars, but with a racehorse, you’re also selling the dream… 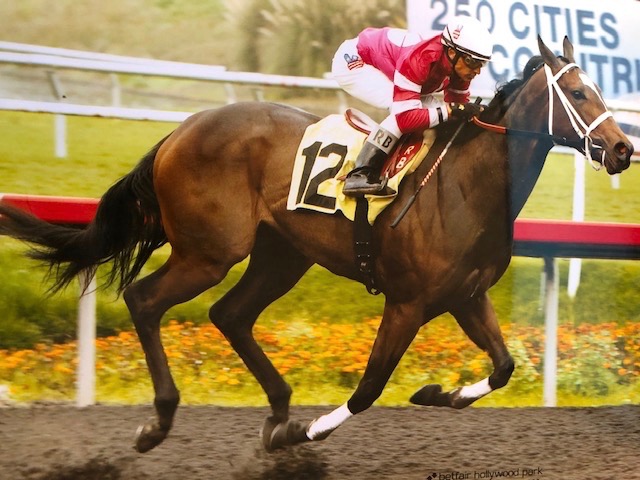 My friend Wallace Wyss is not only a fine artist and author of car books, but he also refers to himself as a cowboy after spending a few years on a ranch in Montana back in the 1960s. He shares a story about a couple horses he put up for sale last year.

“I’ve bought and sold many collector cars from Bizzarrinis to Ferraris, and what’s interesting to me is that racehorses have a built-in status like a sports car that’s been raced, or at least prepped for racing.

Now I think, and I don’t think it’s just me, that there’s a certain amount of status to owning a horse for trail ridin’ that’s track raced.”

Sort of like when Bruce Meyer, founding chairman of the Petersen Automotive Museum, drove his Iso Grifo A3/C to the Malibu Trancas Market Cars & Coffee. Someone would see all the racing stuff on it and jibe him thinking it’s just a poser’s car.

Adds a little oomph when you can reply that way.

So Wallace decides to sell two racehorses, a four-year-old and one a bit long in the tooth at eight years old, but still looking good. One is a stallion trained for racing but never entered in a race, sort of like a race car prepped to run, and then race organizers eliminated its class, so it had no place to go.

A Race Horse with an Ace in the Hole

But the stallion still has an ace in the hole. It can procreate (horse lingo—stand for stud). It doesn’t hurt that 1977 Triple Crown winner Seattle Slew, a very successful racehorse, is in this horses bloodline.

The other male horse did race, though not at any significant headline event, and finished second. For this horse, you could use the sports car saying, “It ran with the winners, finished second in (fill in the year) at Los Alamitos.

Used horses are like used cars. But even though they look good, they can die on you in a second. With a used car you just rebuild the engine. But horses can’t recover from specific injuries. Horses don’t cotton much to wearing splints as people do.

And then there’s the nature of the beast.

Some people think cars have no soul. They’re wrong.

Sort of like when Bruce Meyer, founding chairman of the Petersen Automotive Museum, drove his Iso Grifo A3/C to the Malibu Trancas Market Cars & Coffee

Joe Scalzo, a skilled writer that worked with Wallace at CAR LIFE, once wrote an article about racecars that try to kill you; cars that drivers were scared to drive after another driver had an unexplained wreck in the car.

Some horses seem like they’re out to get you as well. And then others are lovable and good-natured like the two Wallace had up for sale. He said, “I’d keep one for myself, but hey, this is business, and I can’t be having any soft spots, not when there’s a $2,500 bill for hay to be paid.”

But his goal someday, maybe when he retires to his ranch in Mendocino, is to have a horse he can ride into town.

When people stop and say, “Looks Arabian. Ever run the track?”

Wallace can say, “Second at Los Alamitos, 2012,” or something like that.

Do you have any classic car stories? How about any racehorse or racecar memories to share. Please share the story here, or leave a comment below.