Hot rods changed forever when Dick “Magoo” Megugorac stuffed a V12 Ferrari engine into a ’32 Ford Deuce. However, putting Ferrari engines in ’32 Fords didn’t end with the Deucari. The second project from Ferrari of Los Gatos required Magoo to mate a Lemans-kitted Ferrari Daytona V12 engine into a 1932 Ford Victoria (nicknamed a “Vicky”). 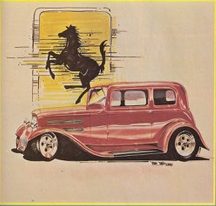 While still under construction, Ferrari of Los Gatos sold the Vicky parts to Steve Dypvik of San Jose, California, and he had Magoo build it. With an engine from a Ferrari, and the frame and body of a Ford Victoria, the car became known as the “Vickari.” The Vicky was shown extensively throughout the Western United States, winning top awards in every show. It was later sold to Steves good friend Bob Scott who owned it for years.  Today, the Vickari is located in Southern California and sometimes hangs out with the Deucari. 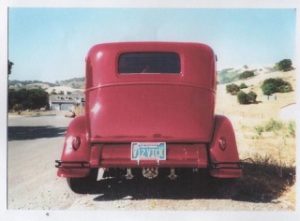 Unlike the Deucari, except for the 410 horsepower Ferrari V12 engine and Rosso Corsa red paint, the Vickari modifications did not follow a Ferrari theme.

The ’32 Ford frame, hood, and front fenders were lengthened by five inches. The tires selected were Michelin radials with a pair of 230x15s in back and 165x14s in front. A Chevy Camaro tilt-steering wheel makes it easier for the driver to maneuver.

While different looking than the convertible deuce coupes, the Vickari appeared in print a few times and made the cover of Rod Action magazine. 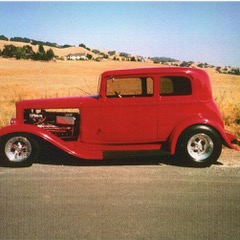 In 1984, Ferrari of Los Gatos sold a third Ferrari powered ’32 Ford, a roadster under construction, to James Ells. James had famous California hot rod builder Roy Brizio finish it. Although similar to the Deucari, the Brizio roadster became longer, leaner and lower.

Both the Burnett/Magoo Deucari and the Ells/Brizio roadster frames were stretched to accommodate the long, “Italian Stallion,” V12 engines. The Deucari 365 GT 2+2 engine is fed by three 40 DFI carburetors, while six sidedraft twin-choke Weber carburetors deliver fuel to the thirsty 365 GTB 4.4 L engine known as the Tipo 251. 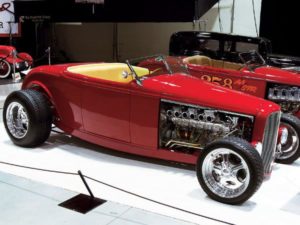 Have you ever built a hot rod, or know of someone that did? Please share the story and pictures here, or leave a comment below.

In the next post, listen to the story of Jonnie King, a radio broadcaster with a passion for hot rods and custom cars.