To car enthusiasts, Ferrari is well known. For everyone else, hearing the word gets their attention, and the sound of an approaching Ferrari will turn their head regardless of age or gender. Combined with its distinctive red color, they’re hooked until the engine can no longer be heard and the red blur has faded into the distance. 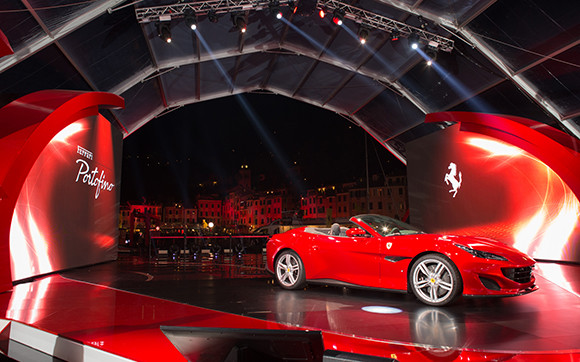 In 2019, Ferrari introduced the Portofino, a sports coupe that transforms into an open-air convertible.

Most people believe the exotic styling, supercar performance, and stratospheric price tag make the dream of owning a Ferrari unachievable. In the 1980s, Ferrari of Los Gatos ran an ad stating just the opposite. It was titled “The Possible Dream.” Anyone that purchased a Ferrari from them and still owns it today probably doesn’t care about their 401 (k) performance. 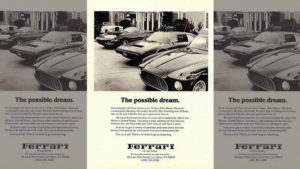 David Letterman, a Ferrari fan and owner, was asked what attracted him to Ferraris. “Why Ferraris?” he responded. “Because the cars are so ridiculous. It’s a visceral response. They’re beautiful, sensual. They smell great: the leather and the smell of the oil they inevitably leak. The sounds of the engine, exhaust, and transmission are just so mechanically obvious. Also, who needs a car that can do 180? They’re fabulous.”

The current stable of new Ferraris may suggest that only the rich and famous can afford one. The entry-level Portofino shown above starts around $215,000. The mid-engine F8 Tributo, the 812 Superfast capable of 211 mph, and the GTC4Lusso four-seat hatchback coupe make up the rest of the pack and range in price from $275,000 to $364,000.

How to Earn the Right to say, “I Own a Ferrari.”

Ferrari’s fall into three groups, new, rare vintage, and used. New is expensive, rare vintage commands a stratospheric price, and the price of used depends on the year and model.

Then there’s the group of Ferrari owners who don’t have megabuck incomes. They shop for used Ferraris—not the rare vintage models—in the 25 to 40-year-old range, that sell in the $25,000 to $50,000 range. These used Ferraris don’t have a racing history and are not rare ones, but they are a Ferrari and owning one gives you the right to say, “Yes, I do own a Ferrari.”

The Possible Dream—You can own your dream Ferrari.

Although the Ferrari signature engine is a V-12, there have been models with four, six, and eight cylinders. Models from the mid-70’s to the late-80’s with eight cylinders, fall into an affordable price range. These include the 308, 328, and the Mondial.

For the Ferrari enthusiast that demands a 12 cylinder engine, there are still affordable used cars to buy, just not as many to choose from.

Finding the right used Ferrari involves many variables. A specific model’s value can be determined by aesthetics, engine type, body designer, numbers produced, and racing history. In most cases, the 2+2 cars cost less than the two-seaters, and closed cars less than the open. However, there are exceptions. “I have a rule called Roush’s rule of racecars,” says Mr. Roush of the Ferrari Market Letter with a laugh. “The more a Ferrari looks like a racecar, the more it will cost.” 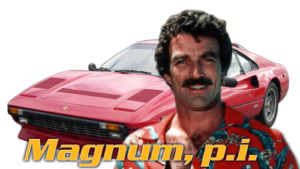 It might also help if the car looks like the one Tom Selleck drove in Magnum PI, the 1980’s television series. Magnum had a red Ferrari 308GTS. “That car represented Ferrari to a large group of fans,” said Maurizio Parlato, ex-chief executive of Ferrari North America.

“The more a Ferrari looks like a racecar, the more it will cost.”

Where to Find the Dream Ferrari at the Right Price

To find that dream car without a nightmare price, check out these online sources for used Ferraris and other classic cars. Classified listings can be seen free at the Ferrari Club of America Web site (www.ferrariclubofamerica.org), and eBaymotors.com. The Sports Car Market magazine publishes the results of auctions each month and publishes a price guide. Subscriptions are available through their website at www.sportscarmarket.com. The Ferrari Market Letter prints classified ads and a price index for many models. Cavallino Magazine is the journal of Ferrari history, covering Ferraris old and new for over 40 years. Each issue includes a high/low price guide for all models.

Be sure to browse and bid on the online auctions for the best vintage and classic cars on BringATrailer.com.

If you have a specific Ferrari you are looking for or have one to sell, feel free to share it with our hundreds of readers by posting your listing here, or leaving a comment below. Or, if you just want to share a cool car story, go right ahead at the same places.