Ferrari, From the Other Side

Ever wonder how Ferrari became so popular when annual sales were under 100 cars in the early 1970s?

Ferrari of Los Gatos opened its doors in 1976, and by the early 1980s, annual sales were
more than a thousand, and the dealership became number one in North America, maybe the
world.

So how does a Ferrari dealer go from being number one in North America to suddenly losing
everything in the blink of an eye?

The revealing answer is in The Dealer: How One California Dealership Fueled the Rise of
Ferrari Cars in America.

Now you can find out what happened on that quiet corner of East Main Street and Pageant Way in Los Gatos, California.

Ferrari of Los Gatos fueled sales so quickly that Enzo Ferrari took notice. He brought the
American dealers to Italy more than once to show his appreciation and let them see a side of
Ferrari few have ever experienced.

Unfortunately, in 1988 when Enzo passed, others thought North American dealers were no
longer needed. One dealer, Brian Burnett, decided that Ferrari of Los Gatos would prove them
wrong.

He fought to save Ferrari of Los Gatos and help the other dealers as well. The Dealer includes stories from owners Brian Burnett and Richard Rivoir, their employees, customers, and other dealers, as told to author Jim Ciardella.

Order your copy of The Dealer at jimciardella.com 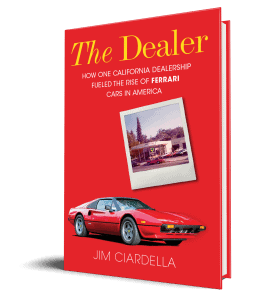 Listen to Jim discuss details of his new book The Dealer with Chad of Midlife Class Cars.

In this interview, Jim shares his experience buying his first Ferrari, what led him to write the
book, his college experience at sixty years old, and how he became good friends with Brian
Burnett. 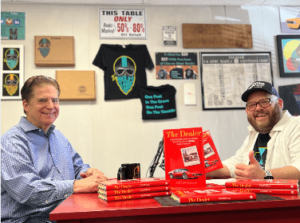 Chad asks the questions we all want answers to, so you don’t want to miss this interview!