The history of racing is populated with rich young men from well-bred families who have the time and money to indulge in sports car racing. The list is endless and yet interesting; they are the fortunate ones of whom most of us can only dream to be and never become. 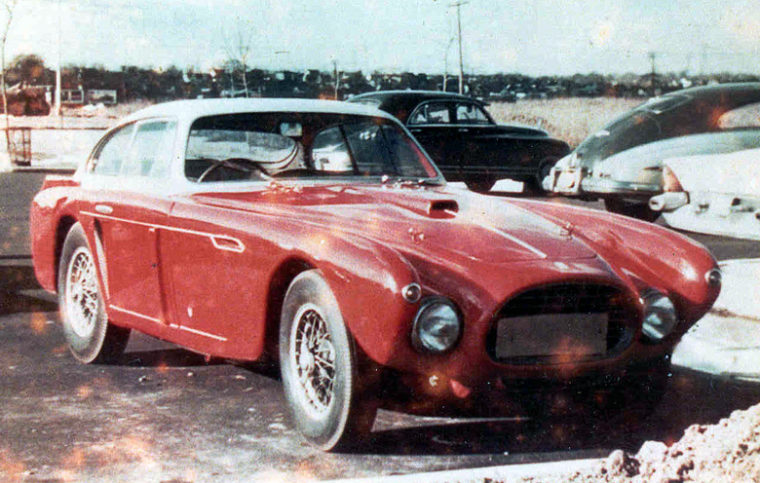 A book about Ed Hugus, Cobra Pilote: The Ed Hugus Story, by Robert D. Walker, is a fine effort concentrating on the Cobra interlude. VeloceToday.com is a magazine devoted to Italian cars and thought it might be nice to see what Ed did with the various Ferraris he drove over his career. This reprint is based on a series of interviews with Ed Hugus in 2003 by VeloceToday.com Editor Pete Vack. The article was originally published in Forza Magazine, June 2004.

When Ed Hugus arrived on the sports car scene in the early 50’s he helped establish the Steel Cities Region of the S.C.C.A and began racing Jags, MGs, and Alfas. He quickly made the transition to Ferraris (among others) and became an SCCA contender. Tall, with Errol Flynn-good looks, Hugus made his way to France and entered the 1956 Le Mans with writer John Bentley, coming in 8th overall in an 1100 cc Cooper, an amazing feat. He went on to drive a wide variety of Ferraris until his retirement in 1967, establishing an excellent record in long distance events, particularly Le Mans. 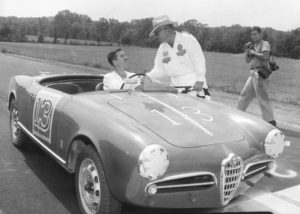 Time and place in doubt, but this is Ed Hugus at an SCCA event in 1957 in the Alfa Veloce prepared by his master mechanic William M. Speer.

Seemingly, Ed Hugus had to be a fortunate son, a gentleman driver, his pockets full of inherited Eisenhower dollars. How else does a guy get to own Ferraris, travel to Europe and race at Le Mans?

How to go From Steel Mills to Ferraris at Lemans

Or maybe we just wanted it to be that way. Truth is, Ed was born on June 30th, 1923. His ancestors came from Alsace Lorraine in 1767–the time of the Huguenot purges. He grew up on farms in Pennsylvania and Ohio, and when he was 18, his father and brother went to work in the steel mills of Pittsburgh. He liked machinery and motorcycles and must have been brimming with confidence and daring. Before World War II, Hugus had an uncle who was an avid bike rider. “He also sometimes rode what they called “In the Barrel”- a large diameter steel cage (about 15 feet diameter) and about 4 1/2 feet wide,” said Hugus. “It revolved around the center anchor as you rode a small motorcycle inside. He taught me how to do it—it was crazy, scary fun!!!” Hugus went to war as a paratrooper on the Pacific front and returned to work for a friend with the unlikely name of Leech Cracraft, who opened the first imported car dealership in Wheeling, West Virginia. 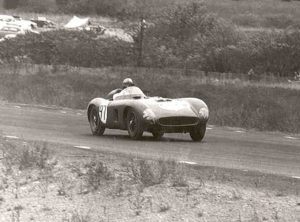 This Ferrari 500 was owned by Chet Flynn, but here raced at Watkins Glen by Hugus. S/N 0652 MDTR already had a long and glorious history.

Whatever fortune Hugus acquired was due to his own hard work. In 1953, sweet-talking friends and enemies alike, he borrowed some money and became the sole dealer in the Pittsburgh area for Porsche, Mercedes, VW, Jag, and most of the British cars. By the late sixties, he became the Southeastern distributor for BMW in Jacksonville, Florida, which is why he can now afford to live in Pebble Beach. So much for the silver spoon set.

Along the way, Hugus was intimately involved with some of the most interesting and powerful Ferraris of the fifties and sixties. In rapid succession, he drove Ferraris from the brutish front engine 500 TR to the semi-sophisticated rear engine 250/275 LM. It wasn’t accidental—in 1956 his Pittsburgh dealership, European Cars, became an early—perhaps the second–Ferrari dealer in the U.S. That brought Hugus into a long-lasting and satisfying relationship with Luigi Chinetti. Asked if there were major problems with obtaining parts, cars, or help, Hugus refuted many of the Chinetti stories. “Never had parts problem whatever it was he got it for me. Treat him fair and he’d treat you fair.” Hugus went to New York three or four times a month and often had dinner at Le Chanteclair with Chinetti and Rene Dreyfus. “I sure wish I had written down some of those conversations,” he laughed. Dreyfus remained a friend and a hero to Ed until his death. They often planned the next few races there, which always included Le Mans, a common interest for all three men.

Le Mans was good to Ed Hugus, and Ed was good for Le Mans. In 1956, while driving the Cooper with John Bentley, Hugus struck up a friendship with the ACO Clerk of Course, Jacques Loste. Loste pulled Ed aside one evening. “Look, Ed, you’ve done very well here with the Cooper. You have an entry for the race anytime you want.” Hugus took him seriously and entered the event every year until 1966. This gave Chinetti a way to enter some of his cars, even before establishing the North American Racing Team.

At Watkins Glen in 1955, Hugus met a GM executive by the name of Chester Flynn who had more ambition than time. Flynn started with GM when it was still Durant, and later was in charge of starting new plants outside the U.S. While building a plant in Venezuela, Flynn raced a Jag XK120, and later befriended engineer Rudolph Uhlenhaut at Mercedes Benz, who in turn made it possible for Flynn to own one of the first 300 SL coupes. The racing bug had bitten him, and in 1956 he purchased a Ferrari 500TR, serial number 0652MDTR, from Temple Buell, and intended to go racing. By the time Flynn got his hands on it, 0652MDTR already had a significant race record with some hard drives. As soon as it rolled out the factory door, Scuderia Ferrari entered it in the 1956 1000km Supercortemaggiore at Monza in the hands of Gendebien and Portago, where it finished fourth, and then shipped it off to Luigi Chinetti who sold it to John Edgar. Edgar, in turn, let Carroll Shelby drive it in two events on the east coast, both of which he won. Temple Buell then bought it for Masten Gregory, who raced the car in eight more events. All this in the last six months of 1956! In March of 1957, it became the property of Flynn. In 1957 Flynn entered the car in fourteen events, but according to Hugus, did not actually drive in many of the races himself, due to company commitments. Hugus raced the car at the Queen’s Cup Main at Watkins Glen, but dnf’d (did not finish). “I drove the car quite a few times when Chester owned it,” recalled Hugus, but the race records don’t always reflect the proper driver.

So much for rich Counts. 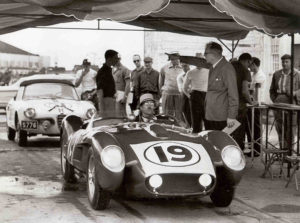 Chet Flynn got involved in the next Hugus Ferrari adventure as well. He arranged for a new 250TR, serial number 0732TR to be entered in the 12 Hours of Sebring in March 1958, for himself and Hugus. Flynn was also a very good friend of the Sebring race Chief Alec Ulmann, so entry was no problem. Painted red, it was almost identical to another 250TR, (serial number 0730), which had also been entered at Sebring, to be driven by E.D. Martin and John Fitch. “However, after the practice, Chinetti decided that Flynn should drive with Martin in 0730, and Fitch would drive with me in 0732.” The last-minute driver change was to cause some confusion over the years. Flynn, driving the car belonging to Martin, flipped 0730 in the afternoon, while Hugus and Fitch eventually retired 0732 with a broken valve spring. Rumors of the soon to be famous “Lucybelle II” having sustained a serious accident were premature.

Flynn was not so lucky. “He was hurt rather badly and lost the use of his left eye as a result of the accident,” said Hugus. Flynn still bought cars, but after Sebring, never raced again. 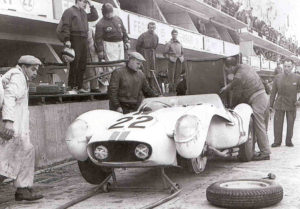 LucyBelle II in the pits at Le Man. Hugus is on the pit wall at left, co-driver Erickson at the right. “It rained and hailed during my stint,” recalled Hugus.

Still intact, 0732 was then shipped to France and readied for the LeMans 24 hour race. “At that time I took ownership of the car and entered it in Le Mans. John Baus, my team manager, had it painted white with a blue stripe for the race.” While Hill and Gendebien won with a factory entered TR, Hugus and Ernie Erickson drove their private entry to seventh overall, while eight other Ferraris retired due to accidents or mechanical problems. “Baus painted the name ‘Lucybelle II’ on the side of the car before the event, and it’s been known as that ever since.” Luci was Lucille Davis, the wife of “Pete” Parker H. Davis, a wealthy Pittsburgh enthusiast and willing patron to Hugus. “Pete was more of a father to me, as well as a business partner and mentor,” recalled Hugus.

If not born with a silver spoon, Hugus learned quickly how to eat at the table of those with fine silverware.

Hugus raced the car (0732) once more at the Watkins Glen Nationals in 1958, where he placed 6th overall, and later sold the famous car directly to Russell Cowles. Dealers can’t afford to get attached to cars.

In 1960, Chinetti again arranged to have him try out the new 250GT SWB at Sebring. S/N 1785 GT was the ninth SWB built, a comp version, and Augie Pabst partnered with Hugus for the Florida event in March. Chinetti owned the car, but a car dealer from New York, Charles Kreisler, paid the expenses for Hugus and Pabst to drive at Sebring. 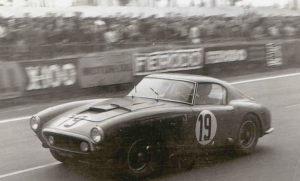 The late 1950s and early sixties were a time of rapid technological change, Ferrari being more conservative than others, the changes came a bit slower to Maranello. Aerodynamic changes were in evidence by 1961 with the 246 S Dino prototype. Chinetti, who must have been very impressed with the Hugus stamina, shipped 0784 to the U.S. for Hugus to drive at Sebring. Hill and Trips previously drove 0784 to second place in the 1960 Targa Florio, and dnf’d at the Ring with Ginther and Scarfiotti up.

At Sebring, it was another dnf for Hugus and co-driver Allan Connell, (a Texas oilman well known for his Birdcage-Ferrari) as the universal joint went out. Later, it went to Pierre Bardinon and then to Dick Merritt before ending up in Great Britain.

Thank you to Pete Vack, author and Editor of VeloceToday.com for allowing us to reprint The Ed Hugus Ferraris Part 1: 1955-1960.

In the next post, Ed Hugus gets to drive Ferrari Prototypes at Le Mans.