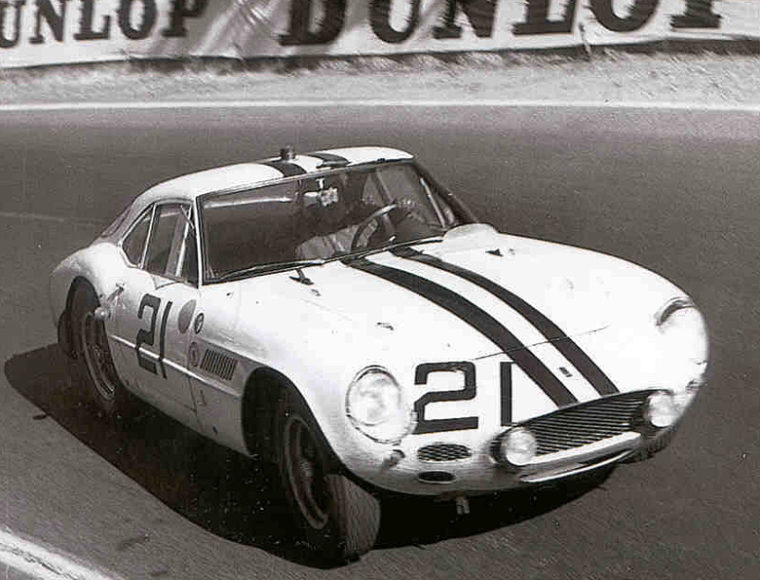 The book Cobra Pilote: The Ed Hugus Story, by Robert D. Walker, is a fine effort, but concentrates on the Cobra interlude. Being a magazine devoted to Italian cars, VeloceToday.com thought it might be nice to see what Ed did with the various Ferraris he drove over his career. This post is a reprint of an article based on a series of interviews with Ed Hugus from 2003 by Peter Vack, editor of VeloceToday.com. The article originally appeared in Forza Magazine, June 2004. Part 1 appeared last week, and this week we conclude with Part 2.

At Le Mans in 1961, Hugus got a ride in an OSCA (Maserati S/N 1001 Tipo S) driving with David Cunningham (no relation to Briggs), but retired early. Back in the prancing horse saddle in September, he drove a Ferrari, the 250 TR59/60, serial number 0770TR 59, which had already been home to Hill, Gendebien, Gurney, Allison, von Trips, Ginther and Rodriguez. By 1961, the car had passed to George Reed, another Ferrari privateer, and the pair took the warhorse to second place at the Elkhart Lake 500.

Astute followers of Ferrari serial numbers may make note of the history of a 246 Dino Sport, serial number 0778 60. Some historians relate a story of the car being raced by Hugus in the U.S., and South America. Hugus does not recall either the car or the South American adventure.

There was more to come. Not only was Hugus able to pilot some of the most significant sports racing Ferraris of the era, but put racing miles behind the wheel of two significant GT prototypes.

Driver of the First Ferrari GTO Ever Made

The first of the prototypes was a 250GT SWB Speciale, serial number 2643GT. One of several experimental cars which led to the GTO, 2643GT was first raced at Le Mans in 1961, where it retired. Stirling Moss drove the car again at the 1962 Daytona Continental where he placed first in class and fourth overall. Sold to Bill McKelvy of Pittsburgh, and entered at Sebring by Hugus, and co-driven by George Reed. They garnered eighth overall and third in class at the twelve hours. In what was becoming a tradition, the car was shipped to France and entered in Le Mans, again to be driven by Hugus and Reed. Here the white and blue car placed ninth overall and fourth in class. “McKelvy was William Sheldon McKelvy, whose forebear’s invented stainless steel,” said Hugus. “He had this racing team of sorts called Scuderia Bear, but never drove any of the cars himself.” 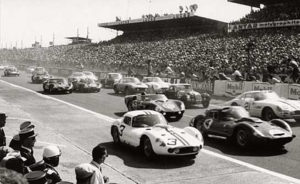 2643GT is seen at the far right of the photo just after the Le Mans start.

If driving the Speciale weren’t special enough, Hugus’s next ride would top anyone’s resume. On February 24th, 1962 the first GTO, serial number 3223 GT, was presented at Ferrari’s press conference at Maranello. Built for Scuderia SSS Repubblica of Venezia, the palace revolt nullified that sale and it went instead to Chinetti, who in turn gave or sold it to McKelvy. But the car did not race until September, when McKelvy entered it in the Bridgehampton Double 400 on the 16th. Drivers were Ed Hugus and Charlie Hayes, who had been campaigning a SWB (short wheelbase) with excellent results the year before. 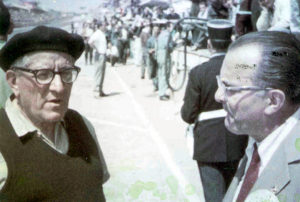 By the 1960s, Hugus was running three different dealerships, a couple of other companies as well, and racing every chance he could get. He would fly to Europe for Le Mans and stay for three weeks. “Chinetti would take me to Maranello, and I recall several rides with Enzo Ferrari, as he road tested the latest GT car. Ferrari spoke some English, and we always got along well.” Hugus didn’t think much of it at the time. “It was all just part of the businesses. I had no hobbies, and I guess you could say that race driving was my hobby, even though it was tied into the business. I just had no time—or desire—to do anything else.” Hugus does not recall getting excited about the cars he drove—whether it was the new GTO, or the 250 LM, it was simply what he enjoyed doing, in a laid-back fashion.

Competing with the Ferraris He Drove and Loved

Hugus has been described by many as easy going, but it hides a very aggressive aspect of his personality that comes alive when the ignition is turned on. Long time friend Rick Dean shot gunned with Hugus on the way from Savannah to Daytona a few years ago. “Ed said he knew he could make the trip in three hours and we’d be at the hotel by 2 pm. There was no reason to arrive that early, or within three hours. But that’s Ed. We drove nonstop, breaking every law on the books, and made it to the hotel with one minute to spare.” A matter of principle, perhaps, or a semi-conscious display of what makes a race driver a race driver.

Ironically, in the early 1960s, Hugus also became involved in an effort that would ultimately see the defeat of the GT Ferraris he so often drove. “In 1962, I became the Cobra distributor for East of the Mississippi.” For Shelby’s Le Mans entry in 1963, two Cobras were prepared by Hugus in England. Hugus entered one of the Cobras for the 1963 Le Mans, where he co-drove it with Peter Jopp. He retired, while the Ferrari GTO of Beurlys and Langlion took second. But again, Hugus demonstrated a remarkable ability to foresee the future. 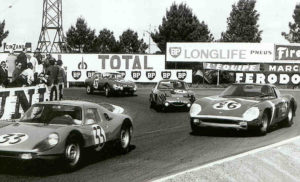 For the 1964 24 hour, Hugus was back behind the wheel of a GTO, but retired with rear axle failure. Again, Hugus was driving a first—Serial Number 5571 GT, owned and entered by Chinetti, was the first GTO with the new short roof body configuration. It would be a Le Mans Hugus would long remember. “About eight hours into the race, the rear axle blew up, I mean literally disintegrated,” recalled Hugus. “I was later told that pieces of the differential went into the crowd, and hurt a couple of people. Another piece went into the pits and went through Briggs Cunningham’s pants!” And there was an inquest. “Chinetti and I had to go before a magistrate, who had in a box some of the pieces of the rear end as evidence. We nearly got our rear ends in jail, but Chinetti got us out ok.” When Chinetti asked for the box of broken parts, though, his request was refused. “That box full of differential parts is still probably in some court in France.”

How to Drive The New Rear Engine Ferrari

The new age forced Ferrari to put the horse after the cart. After eight years of racing front engine Ferraris, Hugus got his chance to handle the rear-engine 250 P, serial number 0814 63. Another SF car, the 250 P had won Le Mans in 1963, with Scarfiotti and Bandini, and placed second at Sebring in 1964. S/N 0814 63 then went to Chinetti, who sent it to Texas, where John Miller, “One of the three best mechanics I’ve ever met,” prepared the car for its last race at Sebring in 1965.

It would not be an easy race for the forty-two-year-old veteran. First, it was hot, unusually hot. Second, it rained, hard, driving rain. Then, a problem with co-drivers. Tom O’Brien came in after only an hour and Hugus had to go back out. “O’Brien was exhausted, and when I came back in, I saw Paul Richards, who was out of ride, and said he’d take over for a while. He lasted an hour. I went back out, but soon the track doctor refused to let me drive without some rest.” Hugus looked around again, and found Charlie Hayes without a ride. Hayes got into the 250 P and continued on through the pouring rain. “About an hour before the end, I had to pit and fix a tie rod.” Hayes and Hugus continued on to finish in twelfth place, a remarkable run given the circumstances. Charlie Hayes was not listed as a co-driver in the results.

The Controversy of Winning When No One Remembers

In 1965, Ed Hugus won the event that had been so much a part of his life. A reserve driver for the Chinetti entry, Hugus watched as Masten Gregory and Jochen Rindt kept the 3250LM (Serial Number 5893) going and going, the competition falling by the wayside. But, according to Hugus, by the early morning hours, Gregory was tired, his eyes even more tired, and during a pit stop told Hugus, “You’re the reserve driver, get in her and take over for a while.” Climbing into the cockpit of the leading 250 LM, Ed Hugus drove as he always drove, fast, smoothly, and above all, totally in synch with the car’s mechanical condition. Ed was at home, doing what he did best.

That’s the story, according to Ed. Let it be written in clear sentences at this juncture: by all accounts, Ed Hugus is a man of his word, one who has never bragged about his career, does not make the rounds of the vintage car circuit in search of rekindled fame, (or fortune), has no ax to grind, and has been known throughout his life as not only a great guy, but an honest one. In other words, if Ed Hugus said he drove the winning car, Ed Hugus did indeed do exactly that. The only problem is, there is no one left who can, or will, verify Ed’s story. Others don’t recall, didn’t see him drive, or won’t talk. The official listing from the Le Mans authorities does not list him as a driver.

Forza contributor and historian Michael Lynch, who has known Ed for years, says, “I’m absolutely sure Ed wouldn’t exaggerate his racing record. However, I have spoken to most of the survivors who were on the scene and could confirm this, and none remembers the incident. Although there are pictures of Ed riding on the winning car, there is none of him on the podium. As a historian, my responsibility is to find at least one corroborating witness or you can’t call it history. I hope this article results in someone coming forward and settling this matter once and for all, in Ed’s favor.”

The Regret of an Opportunity Missed

There is no doubt, however, that Ed Hugus drove a lot of great Ferraris during his years behind the wheel, and with them did surprisingly well. His record at Le Mans alone is not only significant, but also remarkable for the era. Sharing the victory with Rindt and Gregory, however nice that may look on one’s resume, is but a small part of a successful career which spanned 15 years, from his first race at in 1952 at Grand Island driving a Siata, to Sebring in 1967, co-driving a Porsche 906. “I enjoyed every single minute of it all.” 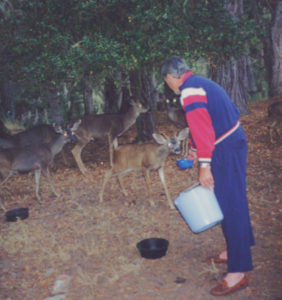 Ed in 2003, “Handing out breakfast”. He loved the animals in the back yard.

Oh yes, no doubt, Le Mans 1959. “I was driving a Porsche RSK with Ernie Ericksson. The factory Porsches were all out with roller crankshaft problems, but ours was still going and we were running in fourth. I told Erik that all we had to do was take it easy on the revs and we stood a chance to win everything—the Index, class, overall, the whole shootin’ match. But Ernie didn’t listen, and sure enough, after 19 hours, it quit. Quietly, I walked back to the truck, found a bottle of brandy, and just cried my eyes out.”

Thank you to Pete Vack, author and Editor of VeloceToday.com for allowing us to reprint The Ed Hugus Ferraris Part 2: 1961-1965.

In the next post, hear the stories of a Ferrari of Los Gatos insider. He recalls amazing customers and the incredible situations they created.