One of the most valuable Ferraris on earth was found languishing at a Rambler dealership (read that and weep, you car hunters who never figured a valuable sports car would be found at such a dud brand dealer). 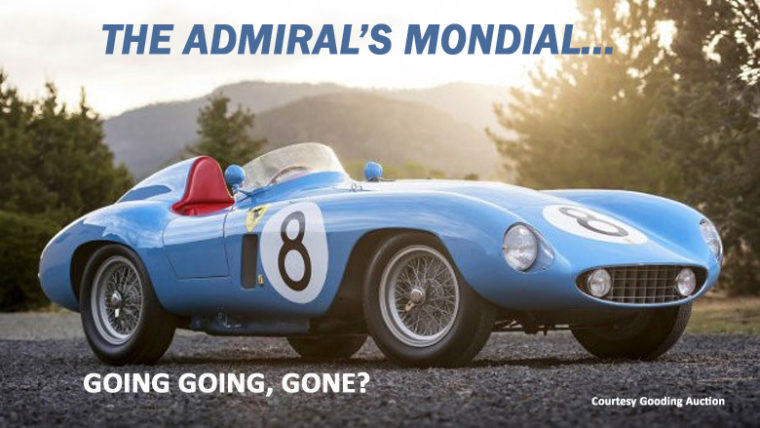 In 1960, Naval Officer Robert Phillips strolled onto a Rambler dealership in Richmond, Virginia. In the back of the lot, a car caught his eye. Others had avoided it because of the damage to its body, engine, and transmission. Its transaxle lay in a wooden box. From the outside, this forlorn blue wreck looked like too large of a project for most car enthusiasts.

Twenty-five-year-old Phillips asked about the car and the Rambler dealer referred him to the owner, Robert Ready Davis. For Phillips, a Ferrari was an absolute must-have, and Robert Ready Davis was ready to sell. Most would have thought the price of $2,225 absurd. But when he scraped off the dirt, Phillips discovered a 1955 Ferrari 500 Mondial Scaglietti Series II, chassis #0556 (0446MD). Only 9 of these cars were built by Ferrari.

A single man when he bought the battered car, Phillips married shortly thereafter. Before going any further, congratulations are in order for his wife for not forcing him to sell what a lot of wives would have viewed as ‘that useless old race car.’

He is lucky he didn’t become a full-time Ferrari mechanic, admitting to one reporter, “I lost all rational sense when I first wiped the grease from the motor head and saw the letters that spelled out FERRARI.”

In 1953, Ferrari created a line of 2.0, 2.5, and 3.0 liter four cylinder racecars to be sold to privateers. These were the 500 Mondial, the 735S, and the 750S, which were followed in later years by the 860, 500TR, 500 TRC and 625 LM. The line of Mondials and Monzas were hugely successful both in terms of sales for Ferrari and wins for privateers. The Series II Mondials and Monzas were similar and looked very much alike. The Mondials were 2-liter cars while the Monzas had 3-liter engines.

Chassis 0556 (0446)MD originally sold to privateer Francois Picard who had it painted French racing blue. The Ferrari factory bought the car back and raced it to first place in its class at the 1955 Grand Prix of Venezuela—the only time a works Ferrari raced in a color other than red. Eventually, the car raced 35 times on three continents.

The Last of the Red Hot Playboys

Porfirio Rubirosa, a diplomat from the Dominican Republic, owned the Mondial 500 s/n 0446MD. His story is highlighted in our earlier post, “Playboy Takes His Last Ride in a Ferrari.” 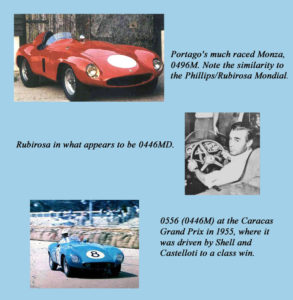 While he wasn’t the greatest racecar driver on the circuit, he did win the Governor’s Cup at Nassau in 1955 in the Mondial. At Sebring four months later, Rubirosa and Jim Pauley took 0446MD to a first in class and 10th overall. Sometime after the Sebring event, Rubirosa sold the car to Charles Hassan of Cincinnati. When Hassan bought 0446MD, it was a good value for the money, and still competitive in the E Modified SCCA class. In 1959, Robert Ready Davis bought 0446MD, still in dark blue livery, but with body damage commensurate with its many battles. Davis apparently left it at the Rambler dealer in Richmond, Virginia to be found by the young naval officer.

Phillips stayed in the Navy a long time, long enough to work his way up to the rank of Rear Admiral. He not only became an Admiral but quite possibly the world’s leading authority on Series II 500 Mondials. He turned out to be a mechanical clairvoyant after buying the Ferrari Mondial. Having no mechanical experience other than replacing the head gasket on his MGA, Phillips repaired the five-speed dog clutch gearbox and differential unit. He also rebuilt the engine and did bodywork. 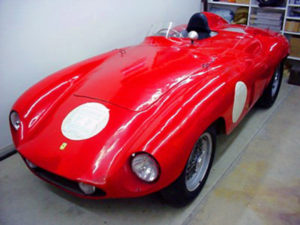 The Phillips Mondial in 2001

Nine months later he entered a driver’s school at Cotati, California and from 1961 to May 1967, Phillips competed in nine events across the U.S, entering the car when his Naval career would permit. He also drove it from coast to coast, an amazing accomplishment then or now. From 1968 to 1988 when he retired, the US Navy kept Phillips globe-trotting, unable to work on, or race, 0446MD. 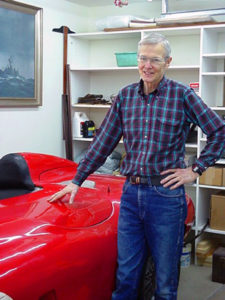 Robert Phillips in 2001,      standing by the Mondial he drove across the country

By the mid-80s, he was very aware of the rising value of the car. Yet he, nor his wife could bear to part with the car that had become so much a part of their life. He considered restoring the car but couldn’t decide if the risk or cost was too much or not. He finally decided that ‘When in doubt, do nothing,’ applied here. He and his wife settled in Arlington, Virginia where he made a special garage unit for the Mondial, provided every measure for long-term storage, and went on about life.

And so, having found a patient and understanding owner, and by escaping the turmoil of the 80s, 0446MD was never restored. Today, however, the car is in the shop, where, according to Robert’s son Bryan, the livery will be restored to the one it wore for its most significant race; first in class at the 1955 Grand Prix of Venezuela in Caracas, October 1955. This was the only time 0556 (0446MD) wore the team Scuderia Ferrari shield. It started the race driven by Harry Shell and finished first in class with Eugenio Castellotti in the driver’s seat.

We’ll have more on this car in a future post.

Do you have any stories about Ferraris or other classic cars? Please share the story here, or leave a comment below.