Henry Ford II tried to buy Ferrari in 1963 and had the door slammed in his face by Enzo Ferrari. Embarrassed by the failed offer, Ford vowed to set his minions to work making a new endurance racer that could win the 24 Hours of Le Mans, Europe’s most important race, and defeat Ferrari in the process.

Photo before the start of the 24 Hours of Le Mans 1966. Five men walk towards the starting line with the official black and white checkered flag that starts the race. Among them is the honorary starter, Henry Ford II

Ford’s point man, Don Frey, assigned Roy Lunn, a native British engineer, to head up development of the endurance racer. The car was called the GT40, a nickname derived from it being 40.5” tall. The engine was a 260 cubic inch Ford with an aluminum block.

Oddly, though Carroll Shelby, an automotive visionary, had driven the winning Aston Martin at Le Mans in 1959, Ford figured they didn’t need this rube—a failed Texas chicken farmer who took up racing in the ‘50s—in the initial stages of the GT40 development.

In 1964, Ford felt they needed expertise in managing an International race team. They hired ex-Aston Martin team boss John Wyer, who had been in charge of Aston’s racing program when Shelby won the race for them in ‘59.

During the 1964 season, not a single Ford GT40 finished a race. Ford turned to Kar-Kraft, a secret race shop his company often used in Dearborn, Michigan. Though Wyer was technically still in charge of building the cars, Carroll Shelby was told to join the Le Mans effort. Shelby brought along his racing mechanics, including some of the good ol’ California hot rodders, like Phil Remington, to get the job done.

Shelby and the Exciting GT40 Change the World of Car Racing

The racing world saw the changes that Shelby made to the car when Ken Miles (featured in Ford v. Ferrari) and Lloyd Ruby finished first in a MkII GT40 at the 1965 Daytona Continental race. However, the success of the car didn’t last long. At the 12 hours of Sebring race, Miles and the GT40 placed a respectable second place, but at the Le Mans 24-hour race, all five GT40s failed to finish. It was deja vu all over again for Ford.

After the ’65 Le Mans failure, Ford sent a few memos down from his executive office to the race team. One succinct note simply read, “Win or else.” And by early 1966, with Ken Miles again at the wheel of a GT40, Ford won at Sebring. Ford’s warnings seemed to have worked.

In 1966, Ford came back to the Le Mans 24-hour race with several teams, only one run by Shelby. That allowed for different management styles. Ford spared nothing, arriving with a racing crew of 100 men, nine cars (including a spare), seven additional engines, and 21 tons of spare parts. Ford attended the race and kept constant pressure on Leo Beebe, head of Ford’s racing program.

GT40 Domination for Success at the Lemans Race

That year Ferrari claimed Ford’s cars were overweight, clumsy, and unreliable, and Italian sophistication would dominate. In this race, however, Ferrari cars fell by the wayside, and for 24 hours Ford was on top. During the last couple laps, Ford began to move the positions of their racers so that on Ford’s orders, there would be a memorable finish, three cars coming across the finish line at once, all Fords.

The famous 1-2-3 finish at Le Mans produced a photo that would become the centerpiece for the Ford marketing team to use in promotions. Ford may have spent a fortune, but he achieved his goal to “beat Ferrari’s ass.” And it wasn’t a flash in the pan either. Ford would go on to win the Lemans 24-hour race for the next three years in a row.

It’s hard to believe, but Ferrari has never won Le Mans since the 1965 season when Luigi Chinetti privately entered a 3.3-liter V12 Ferrari 250 LM and won the race.

It will be exciting to see how the movie portrays the rivalry and battle between Ford and Ferrari. Whatever Hollywood does, the racing should be thrilling.

If you have comments or a story about Formula One racing, or any other classic car story, please share it with us here. Be sure to attach photos as well.

Thank you to author Wallace Wyss, noted historian on the “Ford v. Ferrari” era, and a fine artist of canvas giclee print paintings, for writing most of this post. His work can be reviewed and ordered by contacting him at Photojournalistpro2@gmail.com. 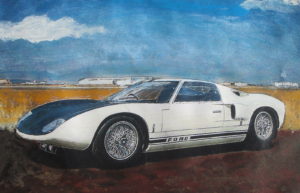 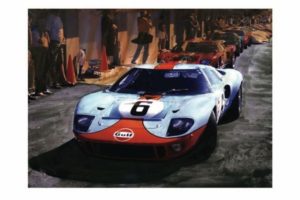