The oldest Ferrari with an undisputed pedigree in existence today is Serial Number 002C. The second Ferrari 159 model built in 1947, it was rebuilt in 1948 as a Ferrari 166 Spyder Corsa and is currently the oldest remaining Ferrari. 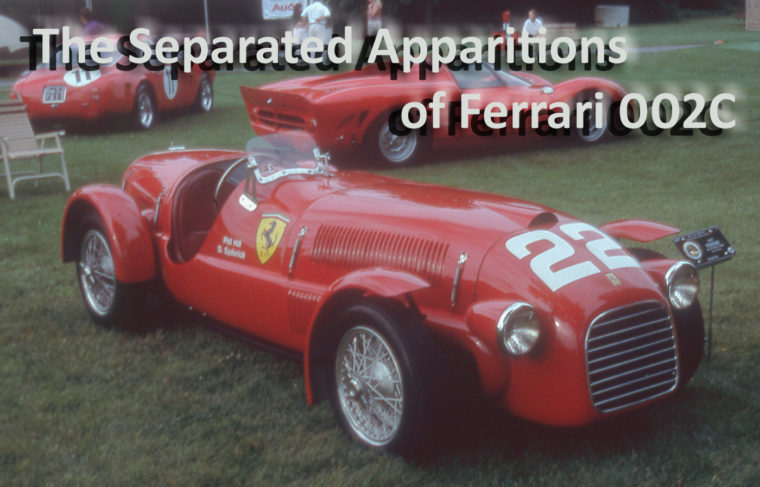 The 1947 Ferrari 159 S and 166 S models succeeded the Ferrari 125 S that had won six of 14 races earlier that year. The car is a 125 S with a larger 1.9-liter V12 engine (larger bore) and very minor cosmetic differences. Producing 125 horsepower at 6,500 rpm, with a compression ratio of 8.5:1, it’s single overhead camshaft design has two valves per cylinder and three Weber 32DCF carburetors. It sports a five-speed manual transmission and retains the Fiat tradition of mounting the engine in-block with the gearbox. It has a steel tube-frame chassis, independent wishbone suspension with transverse leaf springs in front and a live axle in the rear, and hydraulic shock absorbers all round. Drum brakes were specified front and back. 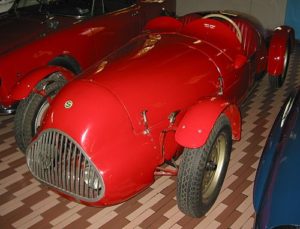 One of the few cars built in 1947, it raced for Scuderia Ferrari on August 15, 1947, at the Circuito di Pescara with the company’s driver, Franco Cortese, coming in second. Although it led overall for a time, the class-winning Ferrari eventually fell behind the Stanguellini of Vincenzo Auricchio.

(Automobili Stanguellini was an Italian maker of small sports cars from 1947 to 1960, based in Modena, Italy and founded by Vittorio Stanguellini). 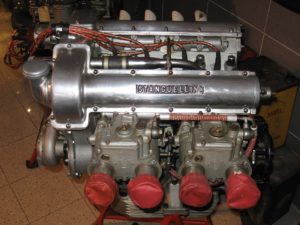 The Engine Conversion that Made Ferrari A Winner

S/N 002C was sold to Gabriele and Soave Besana in January 1948, as the first Ferrari converted into a 166 Spyder Corsa for the 1948-racing season. The brothers sent it to South America where Gabriele raced it in a multitude of events. The car returned to Italy to win the Grand Prix of Bari on May 30, driven by Chico Landi. There is a rumor that the Great One, Tazio Nuvolari, may have driven 002C at some point. 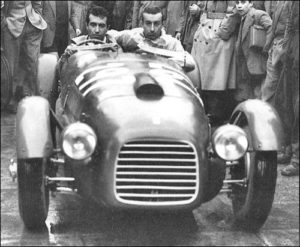 Throughout the rest of the year and in 1949 it continued to participate in Italian races with mixed results. By 1950 it was just another old racecar and was given to Motto to equip it with a more modern spyder configuration.

The car was no beauty but functional in an Italianesque way. At the time Enzo Ferrari was primarily interested in the success of the V-12 engine, then the chassis and lastly the coachwork. Touring’s Carlo Anderloni commented, “This explains how Ferrari could allow an outstanding engine and pretty good mechanicals to be equipped with a cheap, anonymous-looking body with personality.”

The outstanding engine had been developed by Columbo, Busso, and Lampredi as the 125 and by increasing the displacement from 1500 cc to 1908 cc, the 159 was born, only to be replaced almost immediately by the now famous 166, with 1992 cc. The latest modifications were applied to 002C, and thus the car was known as both a 159 and a 166.

After the Motto body job, 002C was sold to a Piero Scotti, who apparently left it at a garage in Florence where it was found and purchased by Bugatti enthusiast Dr. Sam Scher of New York, after which it went through a series of owners, all with the Motto body. Then the story really gets interesting! 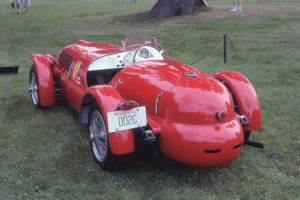 A Valuable Car Identified by Its Gear Knob

Along comes Ferrari historian Stan Nowak, who saw the car at Bridgehampton in 1965, and spotted the gearshift knob with Roman numerals. Stan realized that under the Motto body must be one of the very early cycle-fendered Ferraris and bought the car for client Carl Bross. Nowak convinced Bross to restore 002C to its original body configuration, but before it was completed Bross died. In 1969, the car passed to Anthony Bamford. Ten years went by and Nowak repurchased the unrestored car from Bamford and sold the Motto body to New Yorker Ed Williman, active Virginia Sports Car Club of America (VSCCA) member and Bugatti enthusiast. Nowak then completed the restoration of 002C back to the 1947 Turin Grand Prix configuration, cycle fenders and all.

Back in Williman’s garage, there was Ferrari chassis 031 S and a V12 engine of an unknown serial number. In went the V12 into chassis 031 S and on it, you guessed it, the Motto body that previously adorned the Nowak 002C. (There’s much more to this story, but we’ll keep it focused.)

A Ferrari Ghost Car that Appeared and Disappeared

The Estranged Half and the Better Half in the Same Race

Eventually, Williman sold the Motto-bodied Ferrari to Howarth Gilmore, also a VSCCA racer. Gilmore took the Motto bodied Ferrari to the West Virginia Summit Point Raceway in 1983. And there, we ran into the estranged half of Ferrari 002C. And what an event it turned out to be. Gilmore took the Ferrari on a dashing duel with the Denzel car and lap after lap the two of them vied for first place. It was a vintage racer’s dream. After winning by a few feet, Gilmore jumped out of the Ferrari and literally did a jig. He recalled, “It was the best race in my life, and to be sure, what vintage racing at its best could and perhaps should be.”

Nowak sold the restored 002C to David Cohen, then it went to Michael Sheehan, who passed it to David Sydorick, who brought it to the Ferrari Nationals for the 1997 50th anniversary of Ferrari in Leesburg, Virginia.

Which is where the better half of 002C appeared on the horizon of our experience. 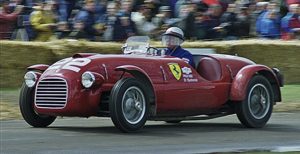 The Ferrari Nationals hosted the track event at nearby, you guessed it, Summit Point Raceway. I attended the event in my trusty 308GTBQV, suitably pampered and prepped for the occasion. In a field notable for exceptional entries, Ferrari 002C was either a sore thumb or the best thing going, depending on one’s sense of aesthetics and or history. To us, 002C was indeed the best thing going, having seen the idle Ferrari 0161 at the Collier Museum, and watching the cycle-fendered Ferrari on the track was a real delight.

We left the event early to avoid traffic and decided to take Route 7 into Leesburg, the better road to enjoy mountain passes and glorious weather. The road was almost deserted, but we noticed a red speck in the mirror, rapidly gaining on us. Most surely another Ferrari, it soon became clear that the red car was small and had no fenders.

A Ferrari Ghost Car that Appeared and Disappeared

The image in the mirror grew larger and reflected what should have been an illusion; a 50-year-old Ferrari, the driver sporting a vintage helmet, black jacket, and white scarf. There was not another car in sight. No support vehicle, no other Ferraris. It was as if a ghost car from the past had descended from the mountains. But it was an apparition that had seen the likes of Raymond Sommer, Franco Cortese, and perhaps even Tazio Nuvolari behind its four-spoke steering wheel.

The driver, whose name we’ll never know, pulled alongside and waved. Alone on the high passes of the Blue Ridge Mountains, we paced each other for the next 15 miles, romantically enjoying the sights and sounds of a bygone era, until regrettably, the apparition of 002C went on its own way to undoubtedly more luxurious accommodations than our own.

Thank you to author Pete Vack of VeloceToday.com, and photographer Alan Boe for allowing us to reprint the story of S/N 002C, the oldest existing Ferrari today.