There is no other Ferrari quite like it. The hood from the nose of the car back to the windshield tapes out at almost 78 inches; the midpoint of the 102.3 inch wheelbase is ahead of the base of the windshield; vertical spoilers, or airfoils, are used on each door to route air along the sides of the car and into ducting ahead of the rear wheel openings for improved tire cooling. 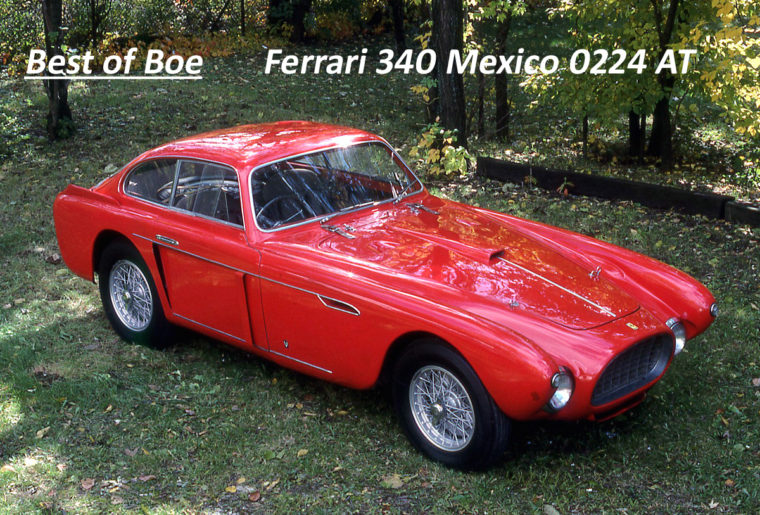 The rare and unusual Ferrari featured on these pages, s/n 0224 AT, is the second of the three 340 Mexico berlinettas which were built for, and entered in, the 1952 running of the Mexican Carrera Panamerican border-to-border race.

This model shows the earliest obvious use of an aerodynamic device on a Ferrari; vestigial fins appear on each rear fender and check out those wild front fender fins, or headlight blinders, all very distinctive design touches, and unique to the four 340 Mexico Ferraris. 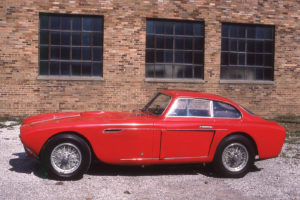 Michelotti and Vignale; famous parents of the Mexico Ferraris

Two names are responsible for all those captivating body lines, curves, vents and acres of aluminum: designer Giovanni Michelotti, and coachbuilder Alfredo Vignale. Although Ferrari had only been in the car building business four years, and most of his chassis up to this point had received bodies by Touring, in 1951 Vignale began to supplant Touring as the constructor of coachwork for the competition cars. Vignale succeeded because the talented Michelotti had an incredible ability to produce one distinctive design after another for an assortment of Italian (and American) car companies. The famous egg-crate grille is Michelotti and Vignale’s legacy to Ferrari. 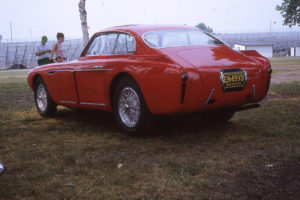 Note the elongated vertical vents beneath the taillights.

Get really close to 0224 AT, and you’ll discover even more interesting body features. For example, there are tiny blisters in the valleys between each front fender and the hood opening. Unique to 0224 AT, the blisters were added in the latter stages of the 1952 Panamericana race to allow clearance for the big 16 inch Borrani wheels and Pirelli tires when turning.

The need for the long, tapered hood is occasioned by the long block Lampredi V-12 tucked in underneath. The 4.1-liter engine was developed from the 340 series specifically for the 1952 Mexican race. A boost in the compression ratio from 8:1 to 8.5:1, coupled with a hotter camshaft, increased the horsepower from 220 bhp at 6000 rpm to 280 bhp at 6500 rpm. The carburetors remained the same as the 340, three Weber 40DCF downdrafts. 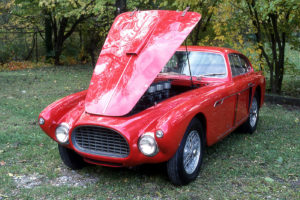 The blister for tire clearance can be seen just above the right-hand headlight.

The drive train made use of a five-speed unsynchronized gearbox and a small rear axle from the 340 Americas. Apparently, the factory rejected the use of the four-speed transmission and stronger rear axle from the 342 America. This choice proved unwise, as pilot Luigi Chinetti noted that severe vibrations from the driveshaft prevented revving the engine beyond 5600 rpm. 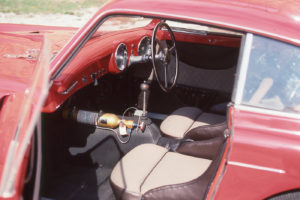 Now that’s our definition of a berlinetta! Spare tire takes up any room to the rear.

The three 340 Mexico berlinettas and one spyder were finished in July and August of 1952 and were built specifically for the Panamericana, but the spyder was not entered. Ferrari’s success the year before with a pair of 212 Vignale coupes coming in first and second put Ferrari on the map in North America and encouraged both Chinetti and Ferrari to enter the 1952 event to enhance sales. Thus, with encouragement from both Chinetti and Franco Cornacchia and his Guastalla Racing Team from Milan, the 340 Mexico Ferraris were built. Much of the cost of transporting the cars to Mexico was borne by the Guastalla team. 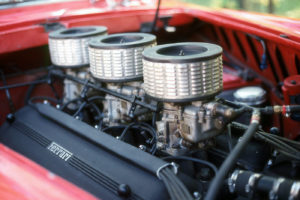 Typical Ferrari engine had more power than most Ferraris, coming in at about 280 hp.

Another factor in the decision to build the cars and bring them to Mexico was a promise by Chinetti to sell the cars, thanks to a commitment by Allen Guiberson of Dallas to purchase the Ferraris after the race. In fact, Guiberson took the first and third Mexicos (0222 AT and 0226 AT) spending $14,500 for each. Our salon car, 0224 AT, returned to New York with Chinetti.

Mexico Ferrari 0224 AT was entered in the Panamericana for Chinetti and Jean Lucas under race number 20, with sponsorship from Sinclair gasoline and Santiago Ontanon, a Mexican enthusiast who owned a detergent company named “1-2-3,” and the Ferrari had the sponsors names all over the car, rare for the times. The Carrera Panamericana was a grueling, five-day event, almost twice as long as the Mille Miglia race, and factory teams from Lancia, Mercedes Benz, Lincoln, Gordini, and Porsche were Ferrari’s competition.

By the end of the third day, only one of the three 340 Mexico Ferraris was still alive, the Chinetti/Lucas car, now in fifth place. The next day Chinetti got the Mexico up to the third position, which he retained to finish third behind the Mercedes of Kling and Herman Lang. 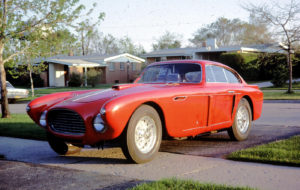 Back in 1967 or 1968, s/n 0224 AT, was sitting in Cal Gleason’s driveway in Detroit. Cal was not a rich man, merely a man with good taste recalled Eric Davison, who took this photo.

Several Owners are on Record Ending with Larry Nicklin

Apparently, 0224 AT stayed with Chinetti up until 1960, but soon after that, it was owned by Tom Stewart from Virginia, who usually collected Lancias. In 1965, Dick Merritt got involved, and the car went to Carl Bross of Detroit for $4,500. In 1967, Cal Gleason, from Michigan, was the next owner. At this point, some restoration and detail work was performed which included putting the original seats back in the car and repainting it red.

By early 1971, Dean Batchelor, the noted journalist, and ex-Bonneville racer owned the car and took it to his home in Nevada. It then passed to Harley Cluxton of Phoenix, but in August 1975, 0224 AT went to John Robertson, who lived in Fork, Montana. Robertson advertised the car for sale in Road & Track, and the car went to Larry Nicklin. Other than the replacement of a Plexiglas quarter window, the car remained the same as when Gleason owned it. 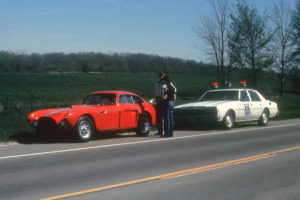 Can our readers shed any light on this photo? 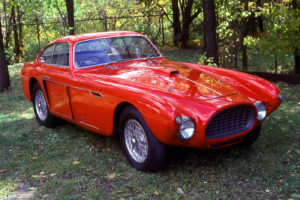 “Mexicos were my dream car of the day”

Larry Nicklin also owned 0226 AT, the Ascari/Farina berlinetta, which later went to Bill Marriott. In fact, it was Nicklin’s quest for knowledge and parts for his first Ferrari Mexico that led to the formation of the Ferrari Club of America in 1962.

Reader Charlie G. from Muncie, IN commented on the photo above: Yes, that was Larry Nicklin getting a ticket. I have a copy of that in my computer file. Larry was a graphic artist, employed by International Harvester in Ft. Wayne. He did a number of renderings of his friend’s cars. I got a visit from him the day before s/n 0226 AT left for a new owner. Mexicos were my dream cars of the day.

Thank you to author Alan Boe and Pete Vack of VeloceToday.com for allowing us to reprint the story of s/n 0224, a historic 340 Mexico Ferrari.