The corner of East Main and Pageant Way in Los Gatos, California has been home to an automobile dealership since the 1920s when Spotswood Dodge moved in. Ferrari of Los Gatos occupied the space from the mid-70s through the mid-90s, followed by Silicon Valley Auto Group, and Los Gatos Luxury Cars.

66 East Main Street back in the day

Mike Gulett and his wife drove down East Main Street a couple years ago and this is a reprint of an article he posted at that time.

The building that once housed Ferrari of Los Gatos has been vacant since Los Gatos Luxury Cars moved out in 2014. The famous corner housed exotic car dealers for 88 years, with Ferrari of Los Gatos located there for 20-years. The Ferrari dealership sold many new and used Ferraris back in the day, maybe more than any other dealer in North America, but suffered from troubles over the years (both legal and business).

The troubles included bankruptcy, criminal charges, and the loss of the Ferrari Dealership. Things certainly changed after Enzo died. The new Ferrari management decided they wanted to convert several dealerships to company stores. The Ferrari sign came down, the dealership turned to luxury cars, and the Ferrari dealership eventually moved to Redwood City.

The Empty Building Can Shock You

When my wife and I drove through Los Gatos a couple of years ago, we were surprised to see the empty site as shown in the photo below.

We lived near this dealership for many years and bought and sold a few cars there. Ferrari of Los Gatos was a fun place to visit on a Saturday afternoon because many other car lovers would stop by, and there was always the opportunity to take out a cool car for a test drive.

It is sad to see an institution close down, but as Bob Dylan said, “The times they are a-changin.”

This article was first published by Mike Gulett at CarQuest.com and is reposted here with permission.

2019 Update. Recently, a fitness center located down the street called The Club of Los Gatos has rented 66 East Main Street. It will be the first non-automobile business to occupy the space since 1926.

Mike received a couple of license plate frames from an ex-Ferrari of Los Gatos employee when the dealership closed down. They’re considered collectibles today. 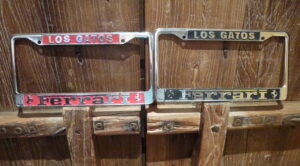 Did you ever visit a dealership at 66 E Main Street? Please share the story here, or leave a comment below.