Every year, George Benson performed for local residents at the Mountain Winery in Saratoga. His 1976 hit song Breezin made him a jazz-pop guitar superstar. Included in his annual routine, was a stop at Ferrari of Los Gatos to see what was for sale. One year, a 1959 red Cadillac convertible caught his eye. 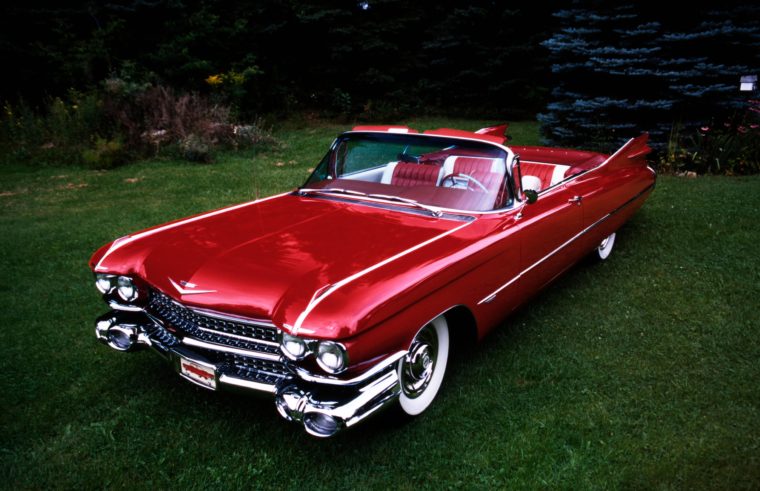 “I enjoyed seeing him each year. He was such a nice guy and always a real gentleman. The time he came in and spotted that convertible Cadillac, it was love at first sight.”

He spent a long time looking it over, went through all the cars details, and said, “I just might buy this car.” When it got to be midday, George decided to leave and have lunch. Maybe then he could make a decision.

As he started to leave, the showroom door opened and in walked Mr. October. In baseball, number 44, was well known for his post-season playoff and World Series heroics. The baseball season usually ends in September, and the playoffs start in early October. Thus, the nickname, Mr. October.

George was surprised to be standing in front of Reggie Jackson. Turns out they both enjoyed the cars at Ferrari of Los Gatos and visited frequently.

Meeting for the first time, Reggie and George started getting to know each other. Their love of Ferraris and classic cars gave them a lot to talk about. And, George wasn’t about to leave now.

“Reggie, take a look at this convertible Cadillac. Let me know what you think about it.”

Reggie loved it too.

They gave that car the once over from end to end, and then decided to walk across the street together. In a short time, they returned with one of their favorite beverages and decided to sit in the convertible with the top down on the showroom floor. The two of them really enjoyed each other’s company, and being at Ferrari of Los Gatos today seemed extra special. The sales staff enjoyed seeing the celebrities around enjoying themselves doing what guys used to do – hang out.

He Couldn’t Leave Without the Cadillac

As morning became afternoon, George made the decision the Cadillac would be taking him to the Mountain Winery that evening. Then it would be shipped to his home after the performance. Not sure what influence Reggie had on the decision, but having a friend confirm your desire to buy something usually makes it easier to do.

George Benson cruised to his performance at the Saratoga Mountain Winery in a red Cadillac convertible from Ferrari of Los Gatos.

It must have been quite a sight seeing George cruising out of Ferrari of Los Gatos in that red Cadillac convertible.

Do you have a celebrity or other car story? Please share it in the comment section below.

In the next post, another celebrity story will surprise you.