Ferrari lovers around the world have longed for a full-length motion picture about anything Ferrari for a long time. The wait is over. In November, The Walt Disney Company and 20th Century Fox will present Ford v Ferrari on the big screen. 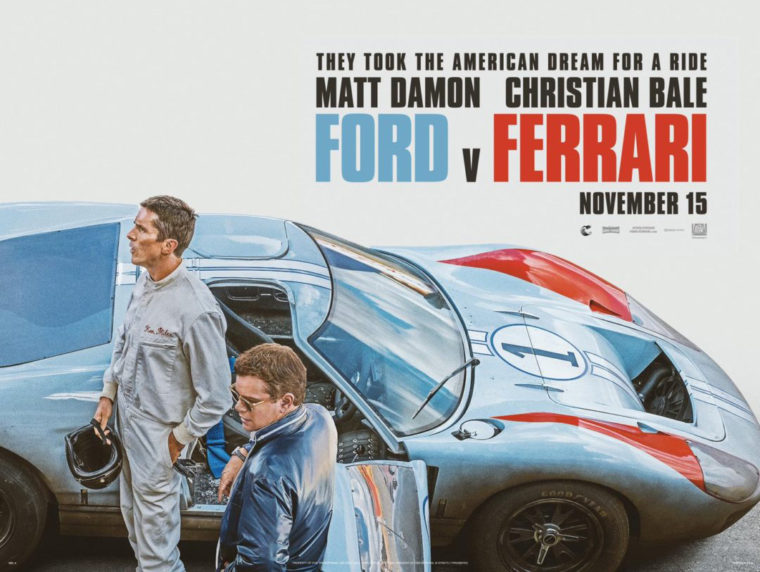 The movie highlights the years 1963-1969 when Henry Ford II declared he would defeat Ferrari on the racetrack at Le Mans. It highlights the lives of Carroll Shelby, played by Matt Damon, and his driver, Ken Miles, played by Christian Bale, and how they helped Ford go to war with Ferrari.

The Blog FLGstory.com has covered the battle between Ford and Ferrari a few times. The post “Ferrari and Ford Surprise the World of Racing” told the story of how Ford almost bought Ferrari in 1963. When that didn’t happen, a furious Henry Ford II vowed he’d beat Ferrari at his own game.

The post titled “The Sixties Battle in a Nutshell” covered how Ford started a new car development team to compete with Ferrari. The team was able to design and build the Ford GT40. In the 1964 24 Hours of Le Mans race, three GT40’s were entered and in 1965, five were entered. Unfortunately for Ford, none of the cars finished either race.

At this point, a frustrated Henry Ford II turned to Caroll Shelby and told him to join the Le Mans effort. “He made it very clear that we were not going to fail again,” said his son, Edsel B. Ford II. And things changed after that.

The movie’s success could well determine if any more car films get funding. It could be that using Director James Mangold’s approach—telling the human story behind the car story—is the way to go.

Elizabeth Blackstock said the following while reviewing the Ford v Ferrari trailer on Jalopnik.com, “…..the trailer is compelling as hell! In between just enough exposition to let us know that we’re all going to love the no-bullshit Shelby and the take-no-shit Miles are some really beautiful racing shots that honestly make me kind of glad I live in the 21st century so I can see iconic race battles recreated at extreme angles in glorious HD. There are crashes, fist fights, fires—there’s romance, family, humor, and, well…just take two minutes to check out the trailer. It looks so good.”

There’s been much written and filmed over the years about what some say is the most spectacular car racing event in history. So far it’s been all documentaries. It’s definitely time we viewed it on the big screen.

I know where I’ll be on November 15th, what about you?

For more information about the movie, the 1966 24 Hours of Le Mans, and other Ferrari and classic car stories, visit FLGstory.com.

The blog FLGstory.com tells how two young men had a dream to sell Ferraris. In 1976, Richard Rivoir and Brian Burnett’s dream turned into a Silicon Valley business that became the best-known Ferrari dealership in the world. It’s the story of Ferrari of Los Gatos and corresponds with a book that is a work in progress.

Jim Ciardella is a storyteller, Ferrari enthusiast, and native Californian. Born and raised in Palo Alto, he grew up in the heart of Silicon Valley and witnessed the dot com boom and the changes it created.

One night, after many stories and Brian’s predictable conclusion, Jim told him, “I’ll do it. I’ll write the book.”

When he isn’t writing to tell a story, Jim, a finance executive, helps technology companies. He started his career in public accounting and soon realized that growing and improving businesses was his calling. And there was no better place to fulfill that calling than Silicon Valley, the land of startups and successful hi-tech firms.

Writing played a big part in all of Jim’s business experiences and is his real passion. Jim believes, “The written word weaves memories into an amazing story.”

The preceding press release was issued on June 12, 2019 on expertclick.com.